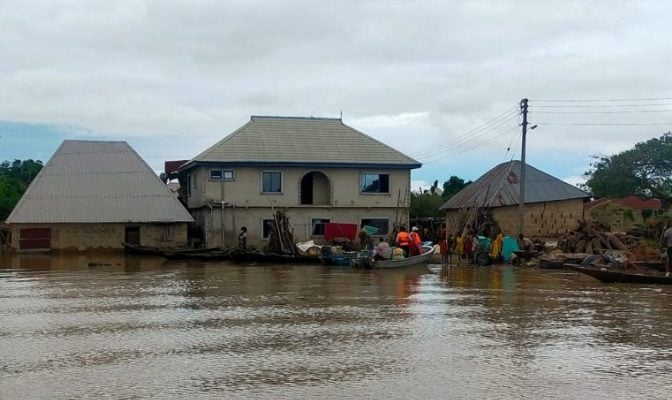 The National Emergency Management Agency (NEMA) has confirmed the death of one Ginikanwa Izuoba in the Enugu-Otu, Aguleri flood.

The Acting State’s Coordinator of the agency Thickman Tanimu, confirmed the incident in Awka Saturday.

Tanimu said that Izuoba died when his house collapsed due to the impact of the flood.

He added that at least 651,053 persons in six local government areas of the state had so far been displaced by flooding.

Tanimu said that the agency had undertaken an assessment of flooding in different parts of the state.

He said that Ogbaru had the highest number of victims with 286,000 persons.

He revealed that Anambra West and East Local Government Areas followed with 237,000 and 103,000 victims, respectively.

We did the assessment tour with a boat because the access roads to the communities have been submerged by flood water,” he said.

Tanimu commended Anambra SEMA for taking some proactive measures to mitigate the impact of the disaster.

Some of the measures, he said, included the identification of 13 IDP camps, recruitment of camp managers and support staff and activation of health workers to work with people in the camps.

He listed the camps so far activated to include the Ifite-Ogwari and Igbakwu Health Centres.

Tanimu said: “The assessment tour is the first step the Federal Government has to take.

We have reported our findings to the management of the agency and based on that, they can now deploy relief materials as appropriate.”

He listed clothing, diapers, bedding, sanitary materials and food items, amongst others as part of the relief materials.

“We once again advise villagers to move to the holding camps to avert further loss of lives,” Tanimu said.