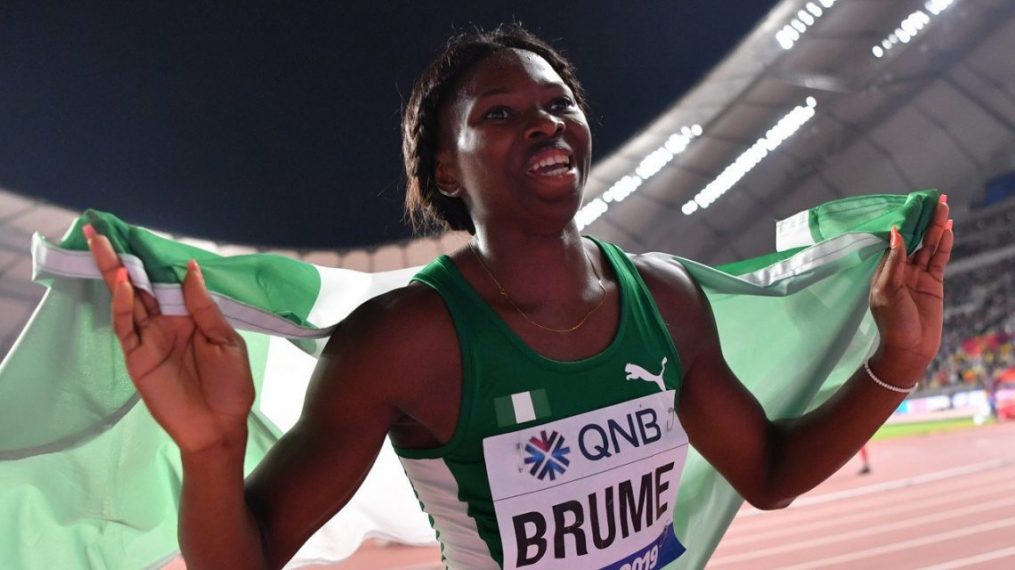 She took bronze after leaping 6.97 metres to come third in the women’s long jump event.

It is Nigeria’s first track and field medal at the Olympics since 2008 when Okagbare won a silver medal in Beijing.

A visibly excited Brume, who was in tears of joy while holding the Nigerian flag said: “Thank you Jesus and thank you all for your prayers. Thank you, thank you so much.”

Brume breezed through the qualification round on Sunday as her leap of 6.76 meters automatically qualified her for Tuesday’s final.

After an exciting competition during which the lead changed hands frequently between Reese and Brume, Mihambo, who was placed third going into the final round, settled the deal with her last leap.

Reigning world champion Mihambo started well as she encouraged the crowd to make some noise before taking the lead on her first attempt with a jump of 6.83 meters.

But she was instantly overtaken by Nigeria’s in-form jumper Brume with a leading score of 6.97 meters, which set the standard in the first of six attempts.

The U.S. NCAA champion and record holder, Tara Davis, were tipped as one to watch before the final and she got off to a solid start, registering 6.62 meters to put her in fourth.

Onto the second attempt and the medal contenders bunched up at the top with Mihambo moving to within 2cm of Brume’s 6.97m and Serbia’s Ivana Spanovic in third (6.91m).

Reese took the top spot on the third attempt, in front of Brume’s jump of 6.97m by virtue of having the second-longest effort, but Brume’s second-best jump of 6.88 on her fourth attempt put her back into the overall lead.

Reese’s fourth attempt of 6.87m meant she trailed Brume by a single centimeter, but the 34-year-old continued to show her great consistency as she moved into the lead on her fifth attempt with a 6.95m jump.

Into the final round and it was a battle between Mihambo, Reese and Brume for the gold medal.

On Mihambo’s last jump, she scored 7.00m to move from bronze into gold position.

Mihambo, who is the current World and European champion, indeed produced the A-level jump and her season’s best (SB) when it mattered the most.

She overtook Reese on her sixth and final attempt with a jump of 22 feet, 11¾ inches which was enough to win the gold medal as she won the competition by 3cm to become the reigning Olympic champion.

The 2014 Commonwealth and current African champion, Brume finished knowing she would settle for the bronze position with her final jump score of 6.90m.

The highly-rated Davis came sixth with her best jump of 6.84m.

Great Britain’s Jazmin Sawyers made the cut to complete six jumps, but came eighth with her longest jump of 6.80m, while Abigail Irozuru also of Great Britain finished down in 11th (6.51m) amongst 12 other athletes who competed in the event.