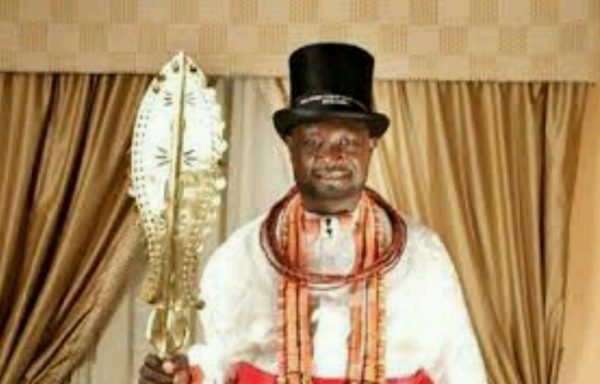 The legal fireworks in the suit brought by the Ologbotsere of Warri Kingdom, Chief Ayirimi Emami, challenging the reported installation of Prince Tsola Emiko as the Olu-designate has begun at the Warri High Court in Delta State.

Chief Emami had approached the court to challenge his alleged suspension by a section of the Ginuwa I Ruling House as well as the process that led to the selection of Prince Tsola Emiko as the Olu-designate.

The Ologbotsere is seeking “an order of interlocutory injunction restraining the defendants either by themselves agents, privies and/or whoever from crowning any person as the Olu of Warri kingdom pending the hearing and determination of this suit.

“An order retraining the defendants either by themselves, agents, privies and by whomsoever from using anybody, particularly the 3rd defendant (Iyatsere) or the Uwangue or any other traditional Chief of Warri kingdom to crown any person as the Olu of the Warri Kingdom against the provision of the Traditional Rulers and Chiefs Edict of 1979, pending the hearing and determination of this suit.”|

At the hearing on Thursday, hordes of Emami’s supporters and loyalists of Prince Tsola had arrived at the court premises hours ahead of the commencement of proceedings, which commenced under tight security.

The Iyatsere of Warri, Chief Johnson Amatserunleghe, frowned at why the Ologbotsere of Warri Kingdom, Chief Ayirimi Emami, failed to add Omoba Tsola Emiko who is the subject of the case as one of defendants in the suit.

Chief Amatserunleghe, in a Notice of Preliminary Objection filed by his counsel, Chief Robinson Ariyo, is asking the court for an order to strike out the entire suit instituted by Chief Emami on the grounds that “the Writ of Summons is defective as to the inconsistency and contradictions of the time allowed for the defendants by the rules of this Honourable court to enter an appearance.”

“That the Claimant/Respondent (the Ologbotsere) has not fulfilled the basic and fundamental requirements to evoke the adjudicatory powers of this Honourable Court in that he has failed in his duties to bring critical parties that are necessary for the conferment of jurisdiction on this Honourable court which parties in this suit includes but are not limited to Omoba Emiko and Chief Awala.”

The Notice of Preliminary objection also claimed that the suit by the Ologbotsere of Warri Kingdom is “so much a bundle of contradictions that it amounts to an academic exercise prohibited by the law.”

Responding, the Ologbotsere of Warri Kingdom, Chief Ayirimi Emami, in a counter-affidavit to Chief Atserunleghe’s preliminary objections stated that after consulting with his counsel, Chief Albert Akpomudje, he verily believed that the arguments put forward by Chief Atserunleghe through his counsel, Chief Ariyo, are all “arguments of law which offend the provision of the Evidence Act,” adding that “the alleged defects in the face of a Writ of Summons is an issue of Law which relates to technicalities.”

Chief Emami also posited in the affidavit that the issue of not making Omoba Emiko and Chief Awala defendants in the suit and “seeking two sets of reliefs are mere outlandish grounds which have nothing to do with the jurisdiction” of the court.

The Ologbotsere further maintained that his claims are “simply declaratory orders, orders setting aside any action contrary to the custom, tradition of the Itsekiri people and the need for compliance” with the “Chieftaincy declaration,” adding that the application by Chief Johnson Atserunleghe through his counsel, Chief Robinson Ariyo was “filed to waste the time of the court,” stressing that “it is in the interest of justice to strike out the preliminary objection.”

When the matter came up for hearing before Hon Justice Veronica Oka Agboje on Thursday, July 22, 2021, counsel of the Ologbotsere, Chief Akpomudje, SAN told the court that parties were in court for a preliminary hearing for interlocutory injunction and motion for preliminary objection.

According to him, the response of the 3rd defendant (Chief Atserunleghe) through his counsel, Chief Ariyo, was only served on him same day of the court sitting.

“The 1st defendant (Chief Dimeyin Dudu Akoma) and 2nd defendant (Prince Emmanuel Okotie-Eboh) did not file any counter so, I believe they are not opposed to our position.

“We have filed and served our response to the preliminary objection of the 3rd defendant. We are yet to receive their written address. Our own case will not take more than a day or two. So, let’s go to the main case instead of all these distractive applications which is time wasting,” Akpomudje, SAN told the judge.

Responding, Chief Ariyo agreed with the submission of his most senior learned Silk, Akpomudje “on the issue of discountenancing all such applications filled by me and go into the substance of the matter” as canvassed by the Senior Advocate of Nigeria, even as he added that he had not technically abandoned his “people but has only deferred it to be determined during the trial, provided all other applications are also deferred.”

On his part, counsel to Prince Emmanuel Okotie-Eboh (2nd defendant), Asifor-Egbe, said he filed memorandum of appearance on July 19, 2021, thus couldn’t file timeously, adding however that he is “still within time to file the statement of defence” of his client,” a position Chief Ariyo concurred with, meaning that both of them have not filed their statements of defence.

Responding, Chief Akpomudje, SAN urged the defendants to file timeously “in the spirit of speedy trial of the substantive suit” as already agreed by all.

Bringing the day’s proceedings to a conclusion, the judge, while not ruling out the possibility of daily hearings in the matter as earlier canvassed by Chief Akpomudje, SAN, said that parties have to factor in the fact that the 1st defendant (Chief Dimeyin Dudu Akoma) has no appearance yet and was not present in court, adding that “accelerated hearing as suggested is to be determined on the 3rd of August which the case is adjourned to.”

In effect, while all preliminary applications are deferred, all pleadings are to be filed and served before the next adjourned date (August 3, 2021).