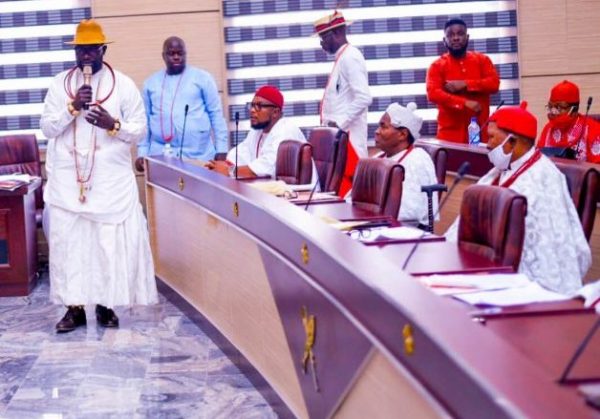 The crisis rocking the Olu of Warri stool has taken a new dimension as the Ologbotsere of Warri Kingdom, Chief Ayirimi Emami, on Friday made presentation before the Delta State Traditional Rulers Council in a bid to stop plans to crown Prince Tsola Emiko as the 21st Olu of Warri next month.

Emami, armed with a letter addressed to the Chairman, Delta State Traditional Rulers’ Council, His Majesty, Emmanuel Oyinke Efeizomo II, Obi of Owa Kingdom, stormed the state secretariat of the council in Asaba, the state capital.

In the letter, Emami advised against honouring invitation to the purported coronation ceremony until the legal hurdles are cleared.

The letter, entitled: “The Need To Adhere Strictly To The Extant Law On Coronation Of A King Vis-à-vis The Avoidable Controversy Surrounding The Choice Of The 21st Olu Of Warri,” reads in full:

“I recall with nostalgia, the unfortunate event surrounding the transition of the 20th Olu of Warri, His Majesty, Ogiame Ikenwoli, who was very active and played prominent role in this respected Council. Palace of the Olu of Warri, through the Director of Palace Administration, Chief Clement A. Maleghemi, had on December 22, 2020, told the world in an elaborate press conference held in Warri, that our now transited revered Monarch, Ogiame Ikenwoli, The Olu of Warri, was indisposed and receiving medical attention by a team of qualified medical specialists. In the referenced press conference, the Director of Palace Administration, noted and I quote inter-alia: ‘Further information on the subject, would be made known to the general public by the Office of the Ologbotsere of Warri Kingdom.’

“In keeping with the Tradition and Custom of Itsekiri people as it relates to the announcement of the passage of our king, Ogiame Ikenwoli, the Olu of Warri and search for a successor, I informed the Ruling House of Warri Kingdom, after due consultation with prominent members of the Warri Traditional Council. A process, which is in tandem with the 1979 Edict of the defunct Bendel State, applicable to Delta State and strictly followed in the processes leading to the choice of Ikenwoli Godfrey Emiko as the 20th Olu of the pristine Warri Kingdom.

“My principle, was for the Itsekiri people to strictly respect the Edict, particularly after many prominent Itsekiris told me not to act contrary. While the processes were ongoing, some persons hijacked it and created the erroneous impression that Itsekiri people no longer have respect for the rule of law.

“Your Majesty, permit me to remind you of the processes as it relates to the selection of a new Olu of Warri, in the event of the passage of an Olu:

“Section 2 of the 1979 Edict, stipulates order of sequence in terms of who succeeds the king in the event of transition. It is from father to son, but if not suitable, the kingship goes to brother, uncle or grandson and if there is no grandson, it goes to other relations, that is where Prince Tsola Emiko belongs in this instance. The last Olu had two sons and brothers, no reason has been given for excluding these sets of persons eligible for the throne of the Olu of Warri, before jumping to the 5th in line of succession to pick Prince Tsola Emiko who is not eligible for consideration, which led to his disqualification in 2015.
What has now changed to make Prince Tsola Emiko eligible for the position as at 2021.

“Section 4 of the Edict, stipulates that for someone to qualify as potential successor to the revered throne of the Olu of Warri, when vacant, the person’s father must be an Itsekiri by birth, while his mother should also be either Itsekiri or Edo origin. ‘IFA’ is the last process of getting successor to the throne, after scaling the process of Ojoye-Isan led by the Ologbotsere.

“The disqualification of Prince Tsola Emiko as OMOBA, was first done in 2015, over failure to meet the criteria to succeed (his transited father) the Olu of Warri, Ogiame Atuwatse II, owing to the fact that his mother is Yoruba and not of Itsekiri or Edo origin, a situation that still exists till date. This was the best opportunity Tsola had in 2015 to be crowned the Olu of Warri if he was eligible and qualified. This led to the emergence of Ikenwoli Godfrey Emiko, as the 20th Warri Monarch.

“Let it be on record, that without an amendment of the existing law, which should be the collective decision of all Itsekiris that must also be in strict compliance with a legal due process of amendments of such extant laws which we all know must pass through the Delta State House of Assembly. It is not about a few noise-making cartel, who are desperate for power, to paint me in negative light before majority of Itsekiris, who stand for the rule of law and unsuspecting non-Itsekiris that are ignorant and uninformed of the letter and spirit of the Edict.

“I want to state very emphatically, that I have no personal interest in this matter and in particular I have nothing against the person of Prince Tsola Emiko, however, in my position as the Ologbotsere of Warri kingdom and in the absence of the Olu, I owe the Itsekiri nation, the duty and obligation to uphold the tradition of the Itsekiri people as codified in the 1979 edict and ensure strict compliance to both the law and the tradition of my people.

“I wish to inform you formally, that in order to have a legal pronouncement on the controversies that have been raging concerning the successor to the Olu of Warri, I have instituted SUIT NO: W/128/2021 between CHIEF AYIRIMI EMAMI VS CHIEF AKOMA DUDUN DIMEYIN and two (2) others for the court to determine.

“If members of the Delta State Traditional Rulers’ Council, allow the traditional brigandage by the cartel to subsist in Warri Kingdom, it would serve as a bad precedent, not just to the Itsekiri people, but to other kingdoms in Delta State and beyond.

“I want to believe that members of this exalted Traditional Rulers’ Council, would have been invited for a purported Coronation of the 21st Olu of Warri, billed for Saturday August 21, 2021. As the Ologbotsere of Warri Kingdom, I want to urge members of this Council, with all sense of respect for the Traditional institution and responsibility bestowed on me by Itsekiri Nation, to ignore the invite, until the Court decides or otherwise.

“I thank you in anticipation of your understanding and cooperation.”