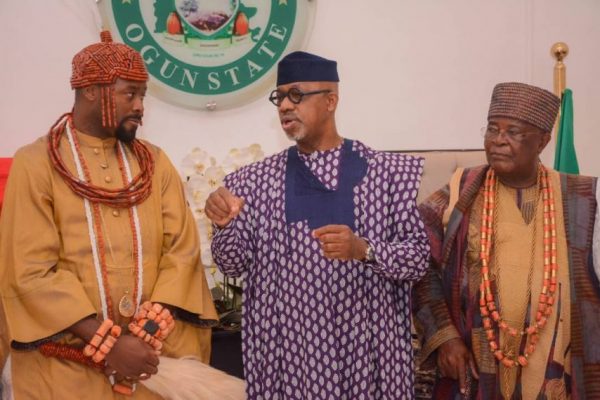 The Olu of Warri, Ogiame Atuwatse, has predicted that Ogun would  soon join the oil producing states as oil and other petrol-carbon products would be discovered in the state.

The monarch made the prediction when he paid a courtesy call on the governor of the state, Dapo Abiodun at the Presidential Lodge in Abeokuta.

The Olu said the State has all it takes to be an oil producing state just like the states in the Niger Delta.

“When our forefathers left the waterside to where we are now, they scooped the water and when they got to Warri, they dropped  the water there. When they came back to the waterside, they also scooped water from Warri and dropped it in waterside and since we have oil in Warri, I am sure oil is also here. I want to predict that very soon, oil will be discovered in this state and you will also join us in that club. When this happens, I will be here to celebrate with you”, the monarch stated

He explained that his visit was to identify with the people of Yorubaland, as Warri people  regard themselves as part of the Yoruba stock

He said: “We are looking forward to building and history that exists between our people and the people of Yoruba nation. Now more than ever, Nigerians need to go back and understand, appreciate their roots, history and where they came from and in doing that, Nigerians will find that truly we are so intertwined, and interwoven.

“We are one and the same, and I think from that sense, we will be able to develop a stronger sense of unity, a strong sense of what it is to be Nigerians”.

In his remarks, the Alake and Paramount Ruler of Egbaland, Oba Adedotun Aremu Gbadebo, who accompanied the Olu of Warri on the visit, said Nigerians are one and same people no matter where they come from, stressing the need for all Nigerians to promote their culture and work towards a united country.

In his response, Gvernor Abiodun called on Nigerians to see themselves as people with common ancestry, history and therefore work towards a peaceful and united country.

He noted that Nigerians, wherever they are, have a lot of things in common especially a deep cultural affiliation that defines them as people of indivisible entity, hence the need to live together in peace and harmony.

“We are from the same ancestry. We have a lot of things in common and are closely related with deep cultural affiliation. A Warri man speaks like a typical Yoruba man and this shows that despite the distance between us, we are the same person.

“Despite the fact that people moved and settled in different parts of the country, we are connected one way or the other, and this should be the essence of our unity”, the governor noted.

Abiodun described the Olu of Warri as a well-brought up person with adequate education  to carry out his role as a prominent monarch, expressing the hope that ancient city of Warri and its environs would experience development during his reign.

The governor, however, called on the monarch to use his position as the Olu of Warri to bring about peace in the Niger Delta, so that Nigeria could gain from its vast oil potentials that abound in the area. 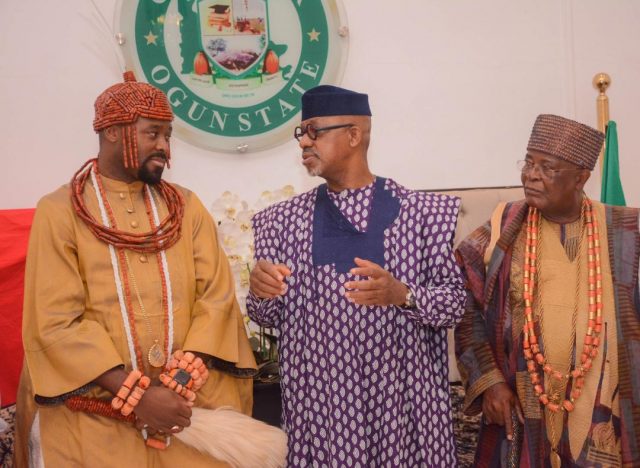 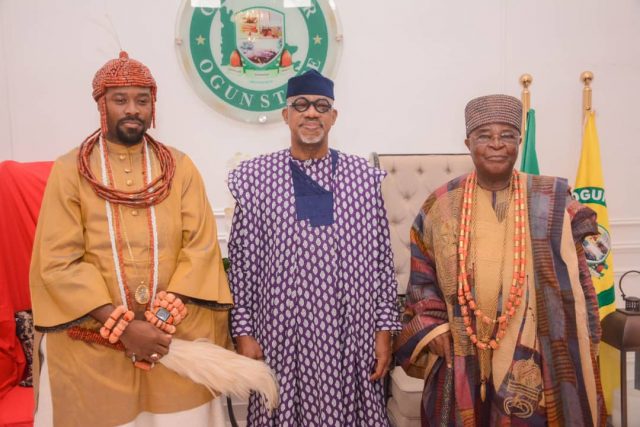