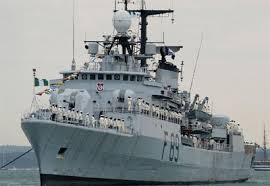 The Nigerian Navy says it has handed over to the Economic and Financial Crimes Commission a vessel and wooden boat carrying 10,000 litres of diesel suspected to be stolen.
A statement released on Sunday by Lieutenant Commander Hamman Ahmed, the Base Information Officer of the Nigerian Navy Ship Pathfinder in Port Harcourt, Rivers State, also said two crew members of the vessel were handed over to EFFC for further investigation and possible prosecution.
According to the statement, the product is worth more than N11 million.
The statement quoted the Commander of NNS Pathfinder, Commodore Sanusi Ibrahim, as saying that the vessel, MT Purity, was apprehended while allegedly transporting the petroleum product without permit.
It said on December 2 while on routine patrol of creeks and water ways, navy troops had accosted the vessel carrying the petroleum product believed to have been illegally refined.
The statement said: “During investigation, we discovered that the vessel, manned by two crew members, had no competency to justify them serving onboard the vessel.
“Similarly, the vessel had no authorisation from both the navy and other relevant government agencies to move petroleum products.”
Ibrahim added that the navy would continue to maintain its zero tolerance for crude oil theft, illegal bunkering, pipeline vandalism, and piracy in the nation’s maritime environment.
The commander, therefore, urged members of the public to continue to assist the navy and other security agencies with information that would lead to the arrest of oil thieves and other economic saboteurs.
The statement further said David Iyang, the Head of Counter Terrorism and General Investigation of EFFC in Rivers State, took delivery of the vessel, the wooden boat and the suspects.
It said Iyang assured the nation that the commission would carry out thorough investigation into the matter and arraign the suspects.
NAN.