Ohanaeze’s Secretary to Igbo on 2023: Amaechi’s right, you can’t be president 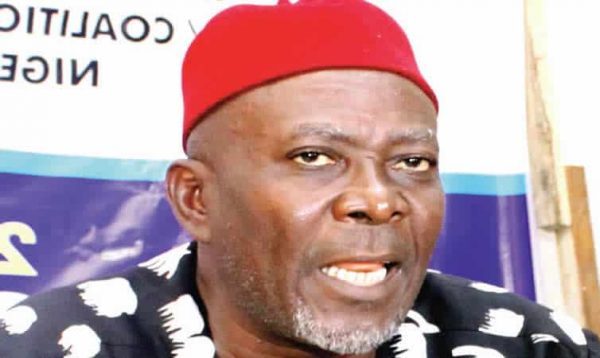 Share
Facebook Twitter LinkedIn Pinterest Email
The Secretary-General of Ohanaeze Ndigbo, Uche Okwukwu, has backed the Minister of Transportation, Rotimi Amaechi, that the South East cannot produce the country’s next president in 2023.
Okwukwu made his position known in a statement on Monday.
He said the people of the South East played themselves out reckoning for the 2023 Presidency by failing to vote for the All Progressives Congress in the 2019 general elections.
It will be recalled that Ohanaeze Ndigbo, led by Chief John Nwodo, had before the election declared support for the presidential candidate of the Peoples Democratic Party, Atiku Abubakar.
Okwukwu said this was the reason he will be supporting Amaechi’s position that the Igbo had by act of omission or commission made it impossible for them to win the Presidency in the next four years.
He said: “Amaechi’s statement is correct because they betrayed him (Amaechi); they betrayed Ndigbo. You must have followed the event leading to the confusion, where a socio-cultural organisation adopted President Muhammadu Buhari without affording Amaechi the opportunity of participating in the meeting of Ndigbo.
“Amaechi is an Igbo man. He has openly said he is Igbo. So, why would you deny him the opportunity of participating in the meeting that purportedly endorsed Buhari and then you denied him the opportunity of presenting his own bulk to the Igbo.
“Of course, whether we agree or not, politics is reality. By not voting for Buhari and denying him any presence in Igboland, we have to a large extent, by omission or commission, shut ourselves out of the presidency in 2023.
“Even if you go to the convention of the APC, Igbo cannot win the primary in the APC. This is because they don’t have any senator, no governor, nobody in the APC. So, how will they win the primary? It is a sad thing, but it is the reality on the ground.
“Amaechi’s predictable assertion to the effect that Ndigbo had by an act of omission or commission shut themselves out of the presidency come 2023 is nothing but the truth.”
Post Views: 0
2023 presidency Igbo Ohaneze Ndigbo Rotimi Amaechi Uche Okwukwu
Share. Facebook Twitter Pinterest LinkedIn Tumblr Email