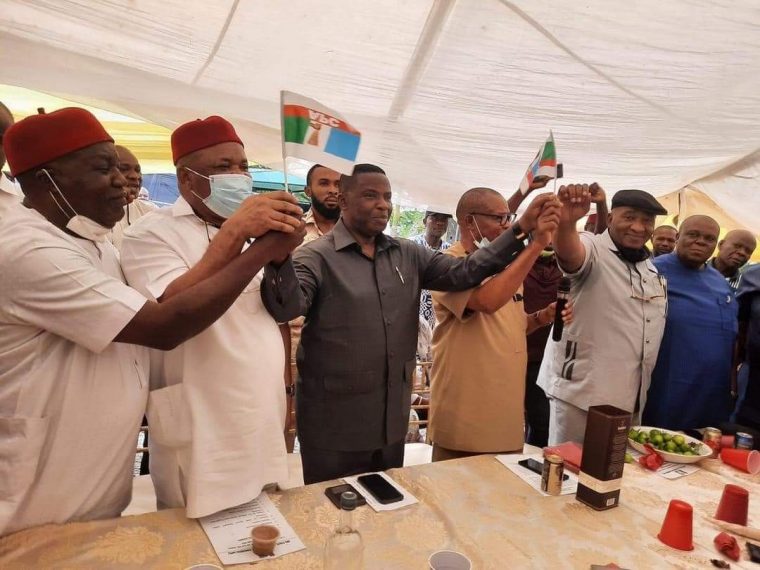 A former Governor of Imo State, Dr. Ikedi Ohakim, has joined the All Progressives Congress.

Ohakim was a one term governor of Imo State elected on the platform of the Peoples Democratic Party.

But on Tuesday in his country home at Burma Retreat, Okohia in Isiala Mbano Local Government Area of Imo State, Ohakim formally registered as a member of the APC.

The ceremony was presided over by the Ward Chairman of Osuachara, Isiala Mbano LGA.

Others who were present were members of the State Working Committee of the party, led by the Chairman, Marcon Nlemigbo; Governor Hope Uzodimma, represented by the Secretary to the State Government, Chief Cosmos Iwu; Chief of Staff to the Governor, Nnamdi Anyaehie; and Speaker, Imo State House of Assembly, Paul Ibezim.

Uzodimma said the APC was delighted to have Ohakim in the fold.

He said he has no doubt that his coming would add value to efforts made by his administration to bring development to the state and improve the quality of lives of the people.

While speaking on his decision to join the APC from the PDP, Ohakim said he was moved by the fact that the administration of Uzodimma was pursuing people-oriented policies and programmes.

He said: “I have a unique orientation in participatory politics that emphasises common interest as against personal interest.

“To me, the moment the interest of the people is not factored in any decision I make, nothing else makes meaning.

“That remains my staying power and driving force.

“APC is the only party that is functionally national in outlook and cannot by any stretch of imagination fit into a party under the control of a few identified individuals.

“I find in Governor Hope Uzodimma a man who is determined to set enviable records that will change the lives and future of the people of the state at the end of the day.”