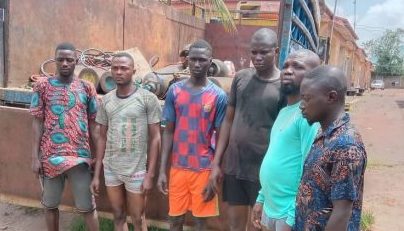 Six men were on Sunday 30th of May 2021 arrested by men of the Ogun State police command for vandalizing railway lane at Oteyi area of Ibogun in Ifo Local Government Area of Ogun State.

The DPO, CSP Samuel Oladele, led his men to the scene where the six suspects were apprehended.

According to a statement by the public relations officer of the command, DSP Abimbola Oyeyemi, 27 rail iron rods, two burning touches with hose, six long cylinders, three short cylinders and one intercolder Volvo Truck with registration number SMK 61 XY were recovered from the vandals.

The Commissioner of Police, Edward Awolowo Ajogun, has ordered that the suspects be transferred to the State Criminal Investigation and Intelligence Department for further investigation and diligent prosecution.