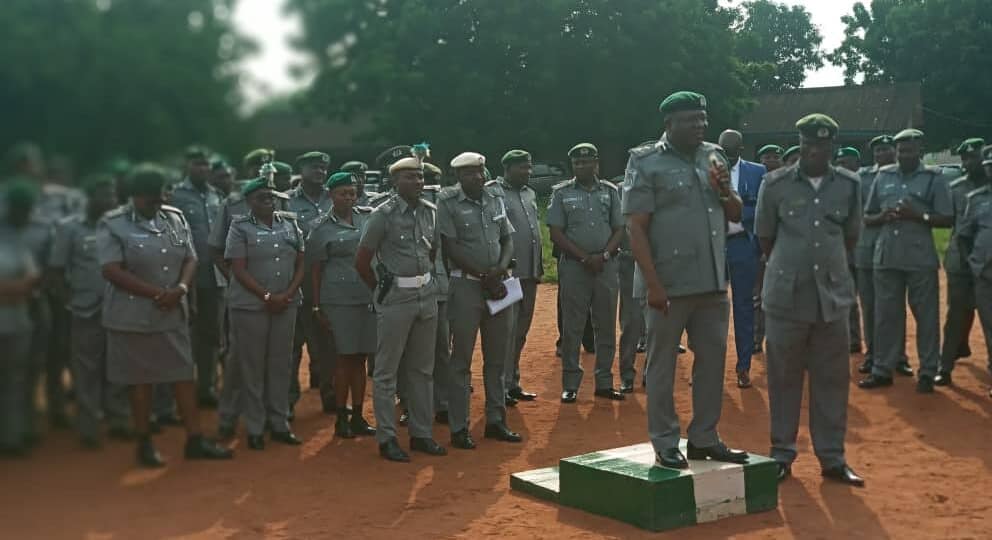 The Ogun State Area Command of the Nigeria Customs Service has generated in over N6.735 billion revenue from January to June this year.
This was against the N2.6 billion generated in the same period in 2018.
The Customs Area Controller of the Command, Comptroller Michael Agbara, disclosed this on Tuesday at the Idiroko border office of the command.
Comptroller Agbara said the revenue was generated from activities of suppression of smuggling, facilitation of trade and protection of the society in January to June 2019.
He said while in the area of anti-smuggling during the period under review, the Command made 549 seizures comprising of 197 units of vehicles; 29,905 (50kg each); and 15 (25kg each) of bags of foreign rice; 1,466 kegs of vegetable oil (25 liters each); 17 units of motorcycles; 427 cartons of frozen poultry products; 25 bales and 29 sacks of second hand clothing and 12 sacks of Ankara rapper.
Comptroller Agbara said: “The seizure of over 29,905 bags of rice in the first half year of 2019 is indeed a landmark among numerous successes recorded as compared to 15,976 bags of rice seized during the corresponding period of the year 2018.
“The aforementioned was achieved due to strategic enforcement measures put in place in line with the Federal Government’s policy targeted at boosting agricultural development within the country.
“Also, within the period of 1st to 30th June, 2019, the Command generated total revenue of N1,196,146, 835.60, while in the area of anti-smuggling the command made a total of 83 seizures with the DPV of N310,555,588.00.
“The items seized include: 30 units of vehicles, 7,095 bags of foreign rice (50kg each), 258 kegs of vegetable oil (25 liters each), 10 units of motorcycles, 7,572 pairs of new, used and rubber foot wears, three bales of secondhand clothing, 28 pieces of used handbags, 392 cartons of frozen poultry products, 200 kegs of PMS (petrol) of 25 litres each, three sacks of Cannabis Sativa, 40 x 142, 60 x 200 & 40 x 41 android cartons of Itel Phone and one set of television.
“However, the above activities were entangled with series of clashes between Officers of the Command and some daredevil smugglers/accomplices leading to loss of lives and properties. The Command will continue to dialogue, engage, sensitize and educate the public on social, security, health and economic implication of smuggling, while on the other hand, the statutory functions of enforcing compliance with strict adherence to the law will be rigorously sustained.
“Finally, I wish to commend the sister agencies, opinion leaders, head of traditional institutions, eminent personalities, fourth realm of the estate (the Media) and other law abiding members of the public on the esteem cooperation and support we are receiving in properly implementing Federal Government Policies.”