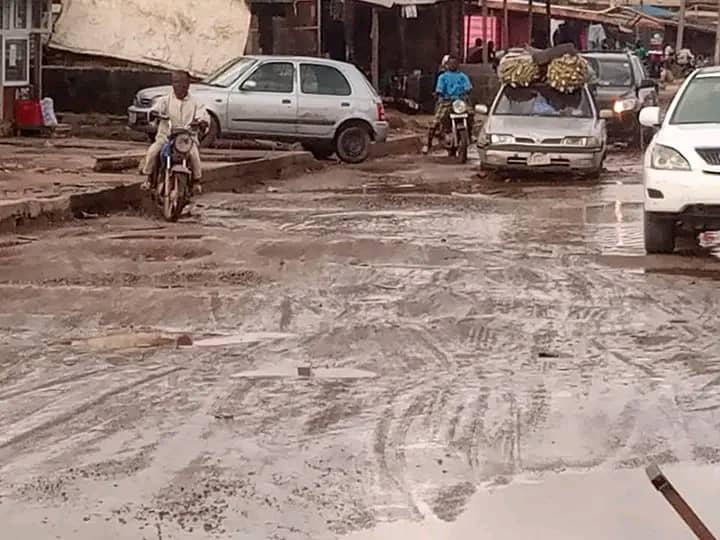 Residents of Federal Housing Estate, Olomore, Iyana-Sanni and others in Abeokuta North Local Government Area of Ogun State have appealed to Governor Dapo Abiodun to look into the issue of bad roads that has caused incessant flooding in the area in recent times.

The residents asked the governor to seize the opportunity of the rainy season to fix the Federal Housing Estate Olomore road, Iyana-Sanni and help solve the problem of erosion that had made life so difficult for them and led to the loss of lives and property.

The residents, who embarked on a peaceful protest on the road, called for the immediate intervention of the state government.

Speaking with the journalists during the protest, the Baale of Olomore Community, the Amoore of Olomore, High Chief/Alhaji Liafisi Adedeji Ogunrounbi, said the road had become a nightmare such that it had led to the loss of lives, and paralysed economic activities in the area, with heavy flooding capable of submerging the communities in the area.

He said, “We are out this morning to draw the attention of our Governor, Prince Dapo Abiodun, to our suffering here. This Olomore, Iyana-Sanni road is in a terrible state of disrepair; it has caused accidents that have led to the loss of lives. Many of us can no longer do our businesses because when it rains, everywhere is flooded and everyone will be stuck.

“Many parents have withdrawn their children from the schools here because those tricycles and motorcycles carrying their children do get submerged in the water. It is really a terrible thing, many landlords here have even turned to tenants in other parts of Abeokuta. We sincerely plead that Governor Dapo Abiodun help to fix this road and help take care of the erosion problem too.”

He said the economic importance of the road could not be overemphasised, saying that it is a link road to the Ayetoro, Ibarapa, Oke-Ogun, Imala, and many other roads that lead to Oyo State.

“Aside from having the largest concentration of the fish, ram and pepper market here, the road also serves as an alternative route whenever the Lafenwa road is blocked. It is just wise the governor to come to our rescue now; there should be no more delay,” he added.