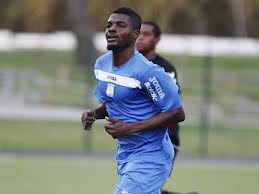 Academica Coimbra of Portugal midfielder, John Ugochukwu Ogu, has joined the growing list of players that have arrived the Super Eagles’ camp in Nuremburg, Germany.
The player, whose earlier plan was to hit Nuremburg on Tuesday, has finally arrived the camp on Wednesday morning.
In a brief chat with The Eagle Online on his arrival in Nuremburg, Ogu said he was excited by the warm reception he got from the techical crew and other members of the national team.
He said: “I ought to have arrived the camp on Tuesday but I had to sort out some issues before leaving Portugal. “However, it’s nice being here and I’m happy to return in the Super Eagles fold.
“We have great guys here and our main target is picking the World Cup ticket and also making an appreciable impact at the Confederation Cup.”
Meanwhile, the Super Eagles camp is expected to be full on Wednesday as other foreign based stars will join up with Israel-based goalkeeper, Austin Ejide, and FC Koln forward, Anthony Ujah, who arrived on Monday.