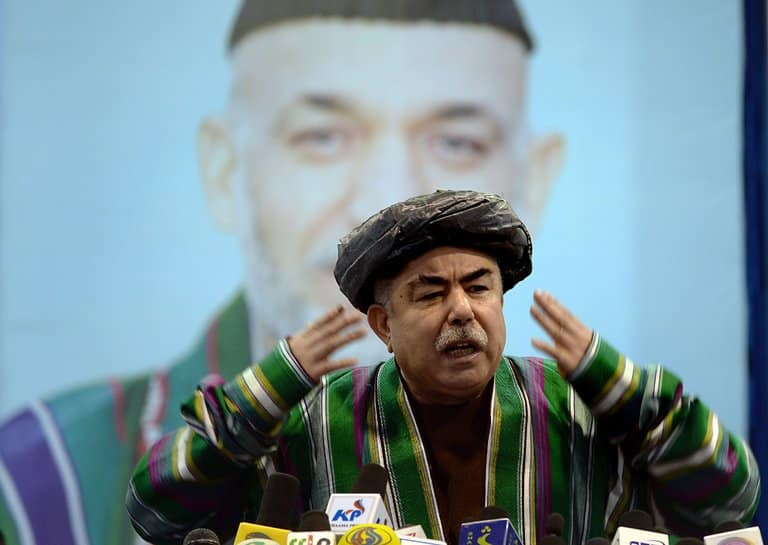 Officials say a private jet, which Afghan officials suspected was bringing back embattled Vice President, Rashid Dostum, from Turkey, was turned away when it tried to land in the northern city of Mazar-i-Sharif.
Dostum, who flew to Turkey in May for medical treatment, has been facing accusations that he ordered a political rival to be detained and tortured in a case that drew strong condemnation from the Kabul government’s international backers, including the U.S.
Dostum, a powerful ethnic Uzbek leader with decades of experience in Afghanistan’s wars and turbulent politics, has denied the accusations.
Afghan security officials, speaking on condition of anonymity, said a private jet carrying seven Turkish engineers to Mazar-i-Sharif was ordered to fly to Kabul for checks following indications that Dostum was trying to come back to Afghanistan.
Sources said the plane instead diverted to Turkmenistan.
A senior official from Dostum’s Junbish party denied that he had tried to enter Afghanistan, saying that a guest of provincial governor Atta Noor had been due to land in Mazar but had gone to Turkmenistan because of technical issues.
“If Dostum wants to come to Afghanistan, no power can stop him because he is Afghanistan’s vice president,” said Junbish deputy head Shujauddin Shuja.
However, witnesses said hundreds of Dostum’s supporters, some carrying posters with slogans like “Welcome back our dear leader!” were waiting in Mazar-i-Sharif, the closest big city to Dostum’s home region of Jawzjan, on the border with Turkmenistan.
Dostum is the main leader of the ethnic Uzbek minority, a group estimated to make up some 9 percent of the population, and has been a vocal critic of President Ashraf Ghani.
He has not been formally charged with any offence but his departure for Turkey was widely seen as a convenient cover that allowed the government to sideline him without the embarrassment of a public dismissal.
However, the case has underlined growing political and ethnic tensions that have threatened the stability of Ghani’s unwieldy government, already under pressure over deteriorating security across Afghanistan.
In June, Noor, the powerful governor of Balkh province and one of the main leaders of the Persian-speaking ethnic Tajiks, and deputy Chief Executive, Mohammad Mohaqiq, a leader of the mainly Shia ethnic Hazara minority, met Dostum in Turkey.
The meeting was widely seen as a possible prelude to a broad opposition movement against the government, which critics say is dominated by Ghani’s Pashtun community, traditionally Afghanistan’s strongest ethnic group.
A spokesman for the NATO-led Resolute Support force, which maintains troops at the Mazar-i-Sharif airport under German command, said that international officials had no role in turning the aircraft away.
“Afghan First Vice President Dostum’s aircraft was not denied permission to land at Mazar-i-Sharif airport by German forces,” Capt. William Salvin said in a statement.
Salvin added: “It is not the business of the Resolute Support mission to get involved in internal Afghan government matters.”