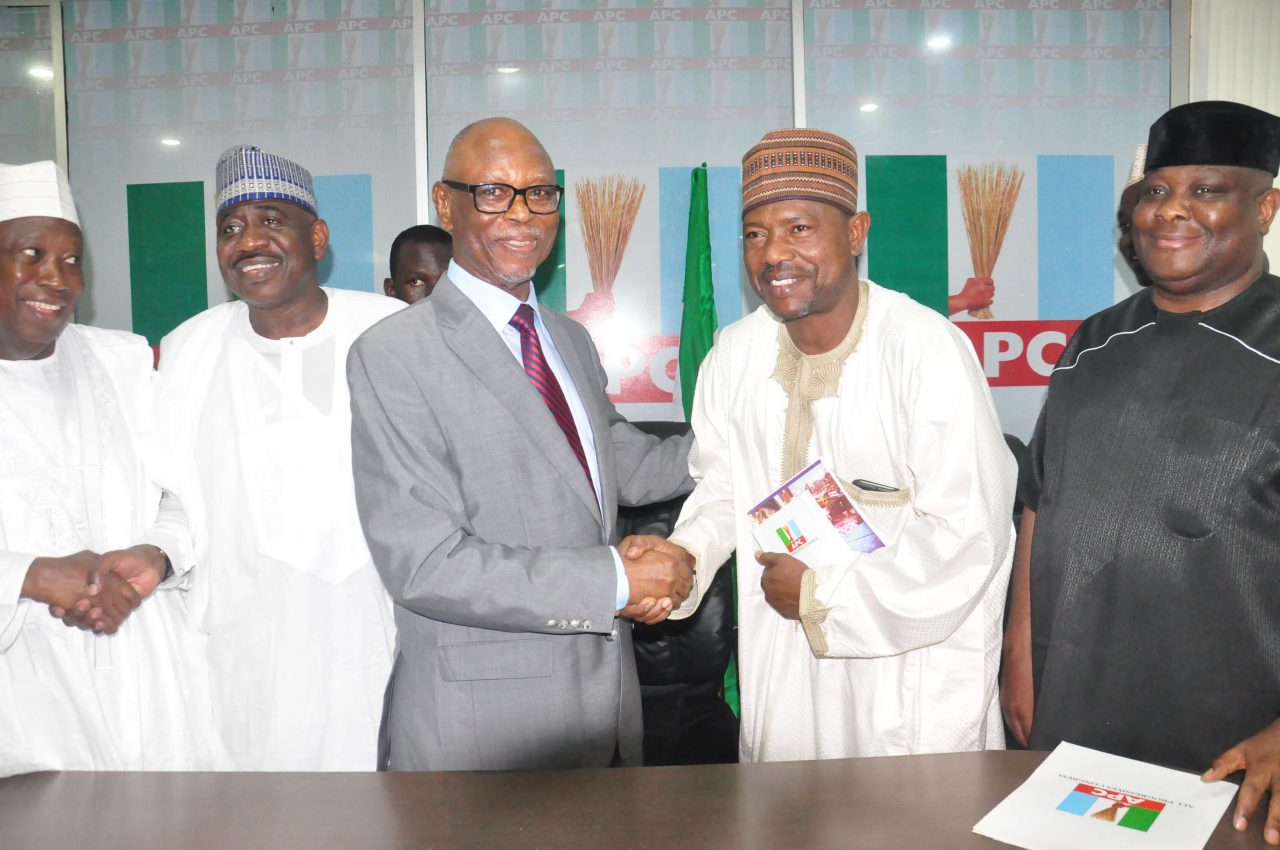 Share
Facebook Twitter LinkedIn Pinterest Email
In one of his last assignments as National Chairman of the All Progressives Congress, Chief John Odigie-Oyegun on Friday evening inaugurated the party’s Kano and Jigawa States Chairmen, Abdullahi Abass and Hon. Ado Sani Kiri.
The APC National Chairman charged the newly-inaugurated State Chairmen to work for the re-election of their respective state governors and President Muhammadu Buhari in the forthcoming 2019 elections to consolidate on the good work the President has started.
Odigie-Oyegun, who was accompanied by the APC National Organising Secretary, Senator Osita Izunaso, performed the inauguration at the party’ National Secretariat in Abuja.
In attendance were the Kano State Governor, Dr. Abdullahi Ganduje; Chief Whip of the House of Representatives, Alhassan Doguwa; Hon. Abdulmumini Jibrin; and a horde of party supporters.
While handing over copies the party’s Constitution and Manifesto to the Kano and Jigawa State Chairmen, Odigie-Oyegun charged them to be lawful in their dealings in office and ensure party supremacy.
“It must be your guidelines. No one of us can be greater than that constitution,” he said.
Odigie-Oyegun: “I want to congratulate the APC Chairmen of Kano and Jigawa states. You have in a sense made my day. This will constitute one of the last pleasant activities that I will be undertaking as Chairman of our great party, the APC.
“You are part of the grassroots leadership of this great party at a very important level. You are the work horses of the APC… We are approaching another election, four years clearly is not enough for the kind of agenda that we have in the manifesto of the party… You are going work very hard in difficult circumstances because of the state of the economy at the point we took over. The fact that it is recovering rapidly now is something you can build on in your message to the people as we advance towards 2019. There are successes, familiarise yourself with those successes of the APC, of President Buhari.”
Odigie-Oyegun cited the administration’s achievements in the railway, agriculture, infrastructure, road network and electricity generation sectors.
He said: “We took over at under 3000 megawatts; today we have a constant 7000 megawatts. It has not solved the problem, but one thing is clear, we have a president that is working hard to improve the sector.
“It is my prayer that you will work hard to return the governors of Kano and Jigawa States and most importantly give our President another four years to consolidate the good work he has started. It has been difficult. Enemies of the nation have been fighting back. Patrons of corruption have been fighting back, but he has been steadfast inspite of criticisms. So work to make sure there is continuity.”
Abdullahi Abass Abdullahi Ganduje apc Jigawa State osita Izunaso
Share. Facebook Twitter Pinterest LinkedIn Tumblr Email