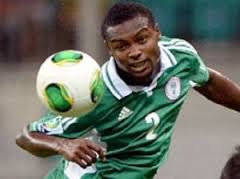 Super Eagles rock solid defender, Godfrey Oboabona, has finally sealed
a four-year deal with Turkish Super Lig newly promoted side, Rizespor.
Oboabona, who was a member of the victorious Super Eagles at Afcon
2013, is expected to take the new opportunity to advance his career.
The 23-year-old quits Sunshine Stars, which he has captained for
several years, to teem up with his compatriot, Uche Kalu, who also
joined Rizespor from Enyimba of Aba.
With this latest development, Oboabona is effectively ruled out of the
CHAN 2014 tournament in South Africa.
He played an active role in ensuring the country qualified over their
West African neighbours, Cote d’ Ivoire.
Oboabona passed his medicals at Rizespor on Wednesday after arriving
Istanbul same day from Nigeria.
The reliable defender got his breakthrough as part of Coach Stephen
Keshi’s re-generation of the Super Eagles with a mix of local and
foreign-based players as he shone during the African Nations Cup in
South Africa where Nigeria emerged champions and has become a mainstay
of the national team’s back four.