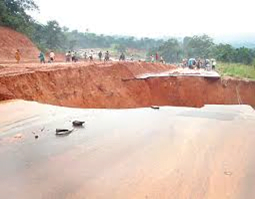 The erosion menace ravaging most parts of Anambra has been described as a serious emergency that required global action to tackle.
Governor Willie Obiano made the remarks while speaking on the sidelines of the just concluded United Nations Climate Change Conference tagged COP25 in Madrid Spain.
Obiano was represented by Mike Ivenso, Project Coordinator of Nigeria Erosion and Watershed Management Project in Anambra who led the state delegation to the conference.
In a statement issued by Emeka Achebe, Communications Officer of Anambra NEWMAP in Awka on Tuesday, Obiano said available arable land in Anambra was being washed away by erosion.
The governor noted that about 36 per cent of the landmass of the state was being threatened by active erosion menace.
He said the state, in partnership with NEWMAP, unveiled a Climate Change Resilience Campaign entitled “Save Our Landscape”.
According to the governor, Anambra which boasts of almost 100 per cent arable land is fast losing its lands and forests with attendant colossal loss of lives, property and critical infrastructure due to gully erosion and flood.
Also speaking, Dr Salisu Dahiru, National Project Coordinator for NEWMAP, who was also at the conference said climate change impacts across Nigeria were evidenced in several dimensions, depending on the region.
Dahiru said intense rainfall which resulted to flood and erosion were felt in over 12 of the 36 states of the federation but was most severe in Anambra.
He said the World Bank funded NEWMAP was carrying out remedial and mitigation project works on approved erosion sites in Anambra.
The national project coordinator said the Save Our Landscape campaign would further create awareness and ameliorate the challenge.
“The unveiled Climate Change Resilience Campaign ‘SOL’ is an innovative land reclamation programme replete with components of afforestation climate smart agriculture, awareness, sensitisation and capacity enhancement.
“SOL is an indicative of the state readiness to tackle climate change impacts through innovations, partnerships and collaborations, funding and technology supports from global climate change community.”