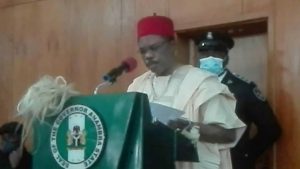 Governor Willie Obiano of Anambra on Tuesday presented a budget proposal of N143.7 billion to the State House of Assembly for approval.

Obiano, who tagged the appropriation bill “Budget of Economic Recovery and Consolidation,” said that it would help sustain past performance and ensure the state maintain its status as a business hub and investment destination.

He said the estimate was premised on the crude oil price benchmark of $35 per barrel.

Obiano said that expected revenue from Value Added Tax was N20.8 billion, while other capital receipts would be N20.9 billion.

The governor said that N36.6 billion would be raised from Internally Generated Revenue.

The budget breakdown revealed that construction of roads, bridge works and infrastructure had the highest allocation of N32 billion followed by healthcare which had N6.8 billion.

Obiano said “we have set aside the sum of N200 million for payment as compensations to our people who have proven cases of gross human rights violations, torture and death from the activities of the defunct SARS in the state.

“Over 70 per cent of my appointees are youths, therefore, we have allocated the sum of N5.4 billion to youth entrepreneurship and empowerment programmes.

“We have also allocated N1.1 billion to empower youths through vocational, agricultural and artisan training programmes as well as N120 million for the establishment of creative centres, innovation hubs and ICT related projects.

“This budget seeks to entrench a new watershed in the development aspirations of the state. We hope, therefore, that it will be given a speedy consideration and passage to ensure a sustained and steady advancement of our state.’’

Receiving the budget, the Speaker, State House of Assembly, Uche Okafor, said the presentation was necessary to obtain legislative consent for the amount of money to be spent in the coming financial year.

He promised that the Assembly would continue to work in synergy with the executive for the good of the people and the development of the state.

The budget revision became necessary following the COVID-19 pandemic which brought about a fall in revenue and the national and state-wide lockdown of businesses.