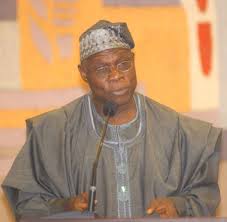 Former President Olusegun Obasanjo has called on African leaders to attract more youths and women into agriculture to increase food production.
Obasanjo made the call in Addis Ababa, the Ethiopian capital, on Monday at a Development Round Table for Partnership to end Hunger in Africa.
Obasanjo said the private sector and other stakeholders must play key roles to make the proposal to work and succeed.
The roundtable session was moderated by Nigeria’s Minister of Agriculture and Rural Development, Dr. Akinwunmi Adesina.
The AU, FAO and the Lula Institute convened the meeting with the theme “Unified approach to end hunger in Africa by 2025.”
Obasanjo said for Africa to eradicate hunger and poverty, “agric-business must replace farming.”
He explained that the sector needed more financing, modern equipment, research and business approach to increase food production.
Obasanjo said such an approach would yield the required dividends with only a few hectares of land that would add value to Africa’s staple foods.
He said: “The fight against hunger must involve every stakeholder, including the Civil Society Organisations.
“This effort should not be left to the governments alone.
“It should include the traditional institutions, the CSOs, the private sector as well as religious leaders and everybody.”
Former President of Ghana, John Kufuor, said there was need for research to modify and add value to food production on the continent.
Earlier, Adesina said Nigeria saved $2 billion annually from the Cassava Initiative, which reduced the $7 billion used in importing wheat to $5 billion.
He said Nigeria is the world’s largest producer of cassava and currently uses 20 per cent high quality cassava for baking bread for the domestic consumption.
He urged stakeholders to invest in the sector to grow agric-business and reduce poverty among the people.
AU Commission Chairperson, Dlamini Zuma, urged governments to introduce hospitals, schools and prisons feeding systems that would create avenue for women to supply foodstuff to such institutions.
Zuma also called for abolition of cultures that restricted land ownership to men to enable women own land and secure banks loans for the expansion of farming businesses.