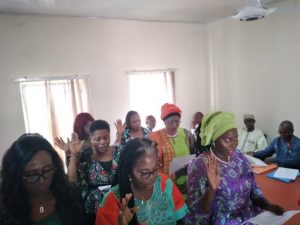 Ladi Bala of the Nigeria Television Authority on Saturday edged past three other contestants to emerge President of the Nigeria Association of Women Journalists.

The election, which took place in Minna, was keenly contested with Ladi polling 439 votes to beat Aishat Ibrahim to runner-up position with 251 votes, while Chindaba Danjuma  and Ruth Abubakar polled 85 and 48 votes each, respectively.

A joyful Bala thanked God Almighty for the victory, while calling on all members to ”mend fences and close gaps” , now  that the elections were over

NAN also reports that Omobola Akingbehin, an Assistant Editor-In-Chief with the News Agency of Nigeria, also emerged as the Vice President ‘B’ Zone of NAWOJ.