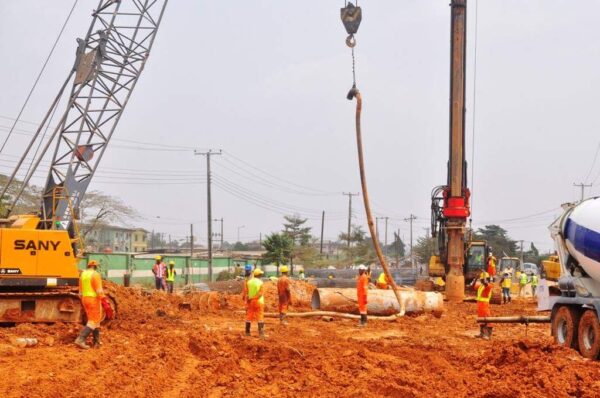 Some road users, including Funmi Akingbagbohun, Chairman, Ikeja Branch, Nigerian Society of Engineers, on Monday called on the Lagos State Government to complete the construction of the Agege Pen Cinema Flyover within the stipulated time.
In separate interviews with the News Agency of Nigeria they, however, commended the efforts of the government, saying the construction of the flyover would eradicate gridlock in the axis.
They said the state government should see to the completion of the project ahead of the rainy season.
A correspondent of NAN who visited the site, reports that various construction activities were ongoing simultaneously.
An engineer on site, who did want his name published because he was not authorised to speak with the press, told NAN that workers were laying beams on the bridge.
He said: “We have been able to lay several beams daily because it is precast.
“Usually, we build a minimum of 120 slabs daily on this site.
“But we do not lay the slabs on the beam till the concrete is fully cured.”
Hajia Hauwa Muse, a trader in Agege Market, told NAN that the government must speedily complete the project to reduce the hardship usually encountered by road users.
Muse also said government embarking on the project was a dream come true for the residents of the area.
He said: “This flyover is a big project, which we are happy about.
“We are begging our good governor to complete it on or before July as he had earlier promised us.
“They should do the work very quickly before the rainy season starts as we are currently suffering in this area.”
A commercial bus driver, Azeez Omotosho, who plies the Agege-Oshodi route, said the flyover when completed, would totally remove gridlock on the axis.
Omotosho said: “When this flyover bridge is completed, those going to Ogba, for example, will not have business passing inside Agege, but now those going to Ijaye must pass inside Agege.
“I want the work to finish before this year’s rainy season starts so that the contractor will not use it as an excuse to elongate the completion date again.”
However, Akingbagbohun, whose branch had been at the forefront of campaigns to eradicate gridlock around Agege, commended the project.
She said: “On this flyover project, I must commend the Lagos State Government for coming up with the initiative to have a fly over because of high gridlock in the area.
“We buy into the project and supported them on the project.
“We go there to visit them and we also go to the site once in a while to conduct traffic, to ensure a free flow of traffic in the area.
“I want to say that the bridge is a welcome idea from the State Government.
“We are expecting that the project will be completed before the end of this year so that the public will begin to enjoy its benefits.”
She said the branch was also collaborating with the Lagos State Ministry of Works and Infrastructure as well as the Federal agencies to ensure good infrastructure delivery to Lagos.
Akingbagbohun also commended the ongoing efforts by various agencies of the State Government aimed at clearing drains and rehabilitate roads ahead of the raining season.
The NSE boss said responses from the various agencies of the State Government toward the issue of infrastructure had indicated that the government was committed to good infrastructure delivery and maintenance.
NAN.