NSCDC to hand over corruption cases to ICPC – CG 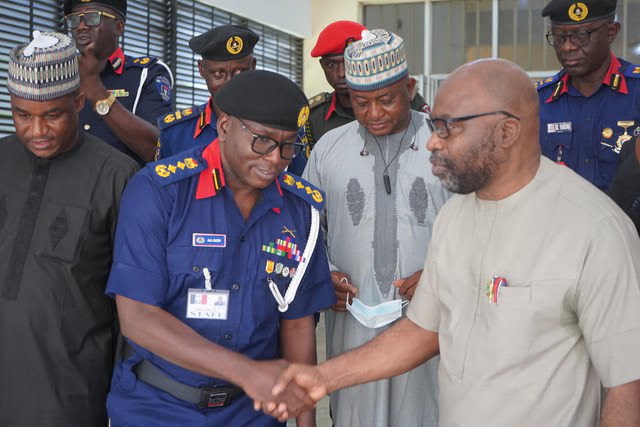 The Commandant-General of Nigeria Security and Civil Defence Corps, Dr. Ahmed Abubakar Audi, has said that all corruption cases involving officers of the corps would be transferred to the Independent Corrupt Practices and Other Related Offences Commission for further action.

Dr. Audi, who spoke at a courtesy visit to the Commission in Abuja, disclosed that NSCDC would discontinue with the high-profile corruption cases before it to allow ICPC that has the mandate and technical know-how to handle.

He also asked for the support of the Commission on staff training, adding that ICPC was better placed to train NSCDC officers on investigation techniques and intelligence gathering.

The Commandant-General lauded the robust working relationship between the two agencies, revealing that officers of NSCDC were more aware of corruption and its associated risk due to the introduction of the Anti-Corruption and Transparency Unit (ACTU) in the Corps by ICPC.

He further said that “NSCDC officers have benefited through the ACTU as they have been trained on Corruption Risk Assessment and System Study”.

In his response, the Chairman of ICPC, Professor Bolaji Owasanoye, SAN, noted that the problem of insecurity facing Nigeria was triggered by high level of corruption and unstable economy.

He stressed that ICPC desires to work with NSCDC in tackling the problems bedevilling the nation because of the critical link between corruption and insecurity, with grave consequences if not handled properly.

Owasanoye said that the synergy between the two agencies was paramount to national interest as information and intelligence gathering would help in combating corruption and to reduce the tendency to crime and criminality in the country.

ICPC boss said that the Commission was willing to help in capacity building for the officers and also to share knowledge on asset management and value with NSCDC.