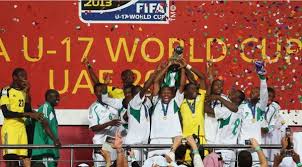 NSC to hold retreat for Eaglets, parents
The National Sports Commission says that it will hold a special retreat for the players of the victorious national U-17 team, the Golden Eaglets, and their parents or guardians.
A statement by the team’s Media Officer, Morakinyo Abodunrin, in Abuja on Sunday, said that the retreat was to forestall “any untoward incident in their immediate and future careers”.
The Golden Eaglets on November 8 won the 2013 FIFA U-17 World Cup in the United Arab Emirates, a record fourth title win in the history of the tournament.
The statement quotes the Minister of Sports, Malam Bolaji Abdullahi, as saying: “The Eaglets must be guided not to make the mistake of some of their predecessors, who failed to progress beyond the age-grade level.
“The success of the Golden Eaglets is an eye-opener to what can be achieved with careful and detailed planning.
“I think a special retreat is necessary for the players, their parents or guardians; so that all of us will be on the same page because their future should be of concern to all of us.”
The statement added, however, that the NSC would not allow the efforts of various stakeholders toward the team’s success to be in vain.
It said: “We at the NSC must not and will not allow the efforts of everybody toward the success of this team to be wasted.
“And I personally believe that Nigerian football stands to gain much, if we can guide these boys very well with regard to their future steps.”