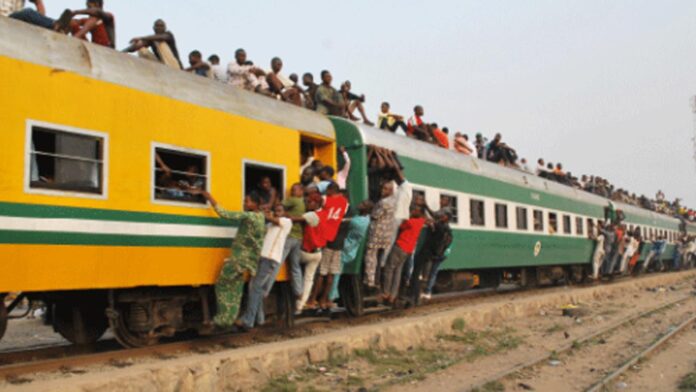 The Nigerian Railway Corporation says its suspended Lagos-Ogun mass transit train service will resume operations on Thursday.
Jerry Oche, the Railway District Manager of NRC in Lagos, disclosed this in an interview with the News Agency of Nigeria in Lagos on Wednesday.
Oche said the operation, suspended in September 2019, would resume with one return trip daily from Kajola in Ogun State to Iddo in Lagos State.
According to him, the train, having 14 coaches, which are 92-seaters, will leave Kajola in Ogun State at 6am for Iddo in Lagos State and depart Lagos for Kajola at 5:30pm daily.
The NRC boss said: “We hope to resume the Lagos mass transit tomorrow, Thursday.
“We will start with just one return trip tomorrow.
“A return trip for us is to and fro.
“We hope to leave Kajola at 6am tomorrow for Iddo and return from Iddo at 5:30 pm.
“For now, it is going to be one trip.
“Part of the reasons why we are doing one trip is that we need to do some trials on the tracks that have just been done and also because of the construction of standard gauge rail line going on.”
He said this was also due to the fact that the level crossing points were not fully ready.
“The implication is that if we put more trains on the tracks, there might be issues of crossing. All we want to do now is one return trip each day for some time, before we fully bounce back,” Oche said.
The district manager, who declined giving the exact time full operations would commence on the narrow gauge corridor, said the corporation would increase the trips soon.
He said the NRC was not unmindful of the fact that one return trip would not meet the demand of the teeming commuters.
Oche said the corporation was also working on the Diesel Multiple Units and their operations would begin soon.
According to him, the NRC has procured prime engines for the DMU and auxiliary engines.
Oche urged commuters to be patient as the corporation would gradually return to what it used to do and surpass it.
On Lagos-Kano train, he said the corporation was looking at Friday to resume the long distance train service.
He, however, said if Friday was not possible, the service would commence next week Friday.
The railway manager appreciated train commuters for their understanding during the period of suspension, saying the corporation felt their pains.
He said the present government was poised to give Nigerians train services that all would be proud of.
Oche said the freight services would not return on Thursday because there was more work to be done on the tracks, but the operation would commence soon.
NAN reports that NRC suspended daily train services, including Mass Transit Train Services, on the narrow gauge from Ijoko in Ogun State to Ebute-Meta and Apapa in Lagos State in September 2019.
The suspension was to fast track the completion of the new Lagos-Ibadan standard gauge line, which required shifting the existing narrow gauge and relaying it to accommodate the standard gauge rail line.
The project is being handled by China Civil Engineering Construction Company.
The corporation had earlier informed its customers that the suspended train services would resume on November 15, 2019, but could not make it happen.