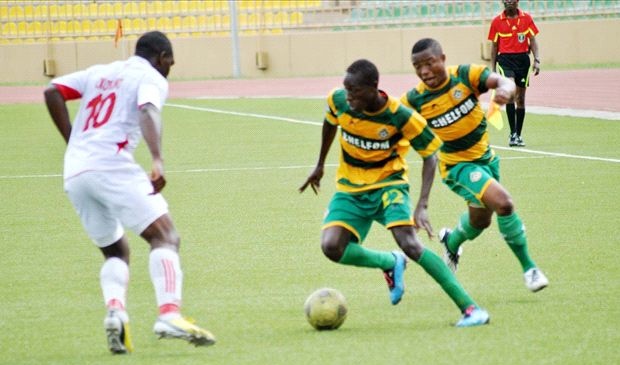 Kwara United will face Rivers United in Illorin this afternoon as the Nigeria Professional Football League enters Match Day 10.
The hosts will be banking on recent good form to record a win over their visitors, which could see them leave the drop zone.
Kwara United are currently riding the crest of a wave, particularly after coming from 3-1 down with four minutes remaining to draw 3-3 with Nasarawa United in Lafia on Match Day 9.
It was their first point on the road this term and will surely serve as a tonic as they face Rivers United today.
Stephen Alfred, who netted twice for the Harmony Boys against the Solid Miners last Sunday, will obviously be the go-to guy for the struggling side who sit just two places above bottom spot on the 20-team NPFL log.
Alfred is a cold-blooded finisher and has scored five goals this season.
Head coach of Kwara United, John Sam Obuh, is full of respect for the ‘Pride of Rivers’ and spoke about his admiration for the Port Harcourt club.
“In the NPFL, there are certain teams you have to show respect to and Rivers United is one of such teams,” Obuh told Rivers United official website.
“Rivers United is a big team; they are bigger than us in every aspect but we will do our best,” he said.
Rivers United won 2-0 against Niger Tornadoes on Match Day 9, the first time the Port Harcourt club won a game by more than a goal margin this term.
Forward, Emeka Ogbugh, who scored one of the two goals in the success over Tornadoes and wants an encore.
Ogbugh said: “We have been working so hard for the past two weeks.
“We know that if we can get three points (against Kwara United on Sunday) and three points in our next home game (against FC Ifeanyiubah), we could move up to either first or second on the table.”
Emeka Atuloma is still unavailable after his exertions with Nigeria’s Super Eagles at the 2018 African Nations Championship in Morocco.
Bernard Ovoke will also miss out as he did not make the trip to Illorin.
However, there is positive news from the infirmary as Obomate Frederick is in line for his first start of the season as he has been included in the match day squad by technical manager, Stanley Eguma.