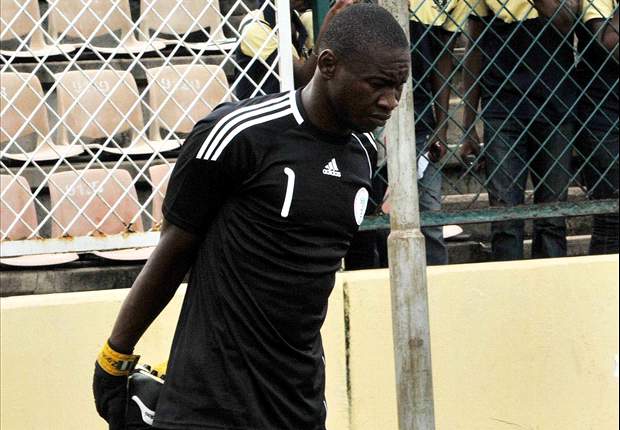 Share
Facebook Twitter LinkedIn Pinterest Email
Two uncharacteristic errors from normally reliable stalwarts cost Rivers United in a 2-1 loss to Abia Warriors in the Nigeria Professional Football League on Sunday.
Poor positioning by goalkeeper, Sunday Rotimi, gifted the Warriors the lead in the 38th minute as Arizne Nwangwu’s 35-yard free kick somehow crept in off the far post despite the veteran’s best efforts to keep it out.
Even the Abia Warriors players seemed shocked that the long range strike had hit the back of the net from nearly 40 yards out.
The visitors seemed rejuvenated after the restart but conceded again, against the run of play, from another error, in the 49th minute.
Left back, Zoumana Doumbia, miscalculated an attempted clearance at the opportune moment, allowing Ndifreke Effiong to creep in behind him and fire a powerful shot beyond the reach of a helpless Rotimi in the United goal.
The visitors looked shell-shocked at a near-empty Umuahia Township Stadium (the game was played behind closed doors) and knew that only a rapid response would prevent a capitulation of monumental proportions.
They did just that, albeit fortuitously, netting what turned out to be a consolation in the end in extremely dramatic circumstances.
They goal came against the run of play in the 65th minute from a defensive error, this time by the hosts, as substitute Malachi Ohawume supplied drastic punishment with deadly efficiency.
The attacker produced a deft chip past a stranded Warriors goalkeeper, Enaholo Joshua following some comical defending by the duo of Ubong Williams and Abiodun Adebayo.
United tried in vain to snatch a leveller but the hosts held out for a richly-deserved win.
The defeat meant United slipped five places to ninth on the log with 27 points from 19 matches while Abia Warriors climbed to tenth with 25 points from 19 matches.
Abia Warriors Sunday Rotimi Zoumana Doumbia
Share. Facebook Twitter Pinterest LinkedIn Tumblr Email