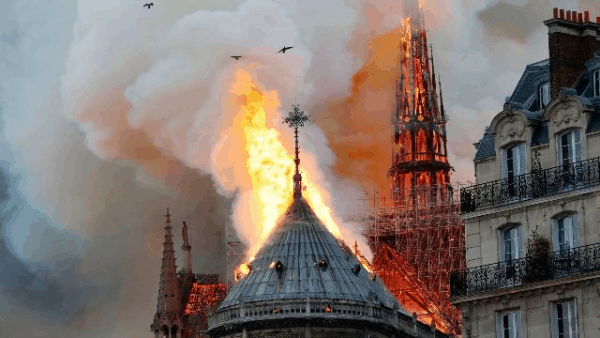 The chief architect at Germany’s Cologne Cathedral on Tuesday reckoned the reconstruction after the fire in Paris’ Notre Dame Cathedral will take decades.
“Now to speculate how long the reconstruction will take and what it will cost is looking into a crystal ball,’’ the chief architect, Peter Fuessenich told newsmen.
According to Fuessenich, just seeing the television images, you know that it will not be just years until the last damage is eliminated, but that it is going to carry on for decades.
“The next few days are now crucial.
“The stone vaults below the burned roof trusses have been soaked with the water used to extinguish the fire.
“This has led to a gain in weight many times over in the vaulted ceilings. One will have to wait the next few days to see if the vaults will withstand this weight,’’ Fuessenich told dpa.
The destruction of Notre Dame’s roof trusses was a particularly great loss, because they had mostly originated from the 13th century.
Cologne Cathedral has roof trusses made of iron from the 19th century.
“Compared to a wooden one, it does not burn directly.
He said: “But if a big fire affects it, then it also has consequences: Then an iron roof truss warps.”