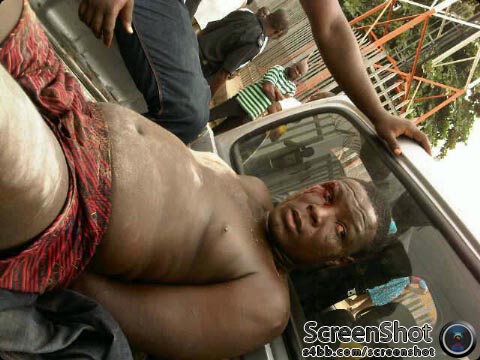 The long arm of the law has caught up with one of Lagos State’s alleged notorious gangster, Balogun Ibrahim, popularly known as Small JPron.
Ibrahim was arrested by policemen attached to the Pedro Police Station on Saturday about 10.03am following a report by a resident that Ibrahim, with two members of his gang, one Afilo and Kunle Atunrase, also known as Eyin Bouncing, were attacking residents at Bawahala Street in Shomolu.
Following this report, the policemen mobilised and went to the scene of the incident.
Both Afilo and Atunrase, on sighting the policemen, took to their heels, firing gunshots at the policemen as they fled.
Luck however ran out on Ibrahim when he was subdued by the policemen and eventually arrested.
As soon as the news of his arrest spread like wild fire, residents trooped en mass to Pedro Police Station to catch a glimpse of the wanted suspected.
There was wild jubilation when it was ascertained that the police finally had Ibrahim in their custody after years of declaring him wanted for various alleged crimes, including murder, in Shomolu.
The police had declared Ibrahim wanted last year after his gang attacked the councillor representing the Ilaje Constituency, Sunday Ojajuni.
In that incident, policemen attached to the state Special Anti Robbery Squad, led by Toefeek Ologede, an Assistant Superintendent of Police, engaged the gang in a gun duel and three of Ibrahim’s alleged gang members were killed.
Ibrahim, however, escaped.
Also in March 2011, residents alleged that Ibrahim and his gang, spotting crested T shirts with the inscription “Team Lagos”, shot dead one Anthony, a commercial motorcycle rider when the gang went to attack members of the National Union of Road Transport Workers at their park at Bajulaiye area of Shomolu.
Anthony’s heavily pregnant wife petitioned and cried for justice but to no avail.
Following the alleged criminal records of the gang, residents also petitioned the police high command and the Lagos State Government over the incessant attacks on residents by the gang.
Also in fueling the Fadeyi, Mushin and Onipanu gang war, Ibrahim was alleged to have participated with his gang alongside one Toba in the brutal killing of one Aro in 2006.
Aro was beheaded and his body was never found.
Aro’s brutal murder led to attacks and counter attacks by rival gangs in Fadeyi and Mushin.
Ibrahim has since been transferred to the SARS Ikeja, at the state police headquarters.
Residents are however pleading with the police to investigate the gang thoroughly so as to arrest other fleeing members.
A resident told The Eagle Online: “Though we are very happy over his arrest but this gang is evasive and soon we will see them walking free in Shomolu, committing more havoc and spreading fear.
“You can see how Ibrahim’s gang members, led by one Yesiru, attacked a man called Edward yesterday with matchet.
“Edward was in his house at Ponrele Street when the gang attacked him because they learnt it was Edward that exposed Ibrahim.
“The gang dragged Edward to the Sabo Police Station and labelled him an armed robber.
“That’s how they operate, harming innocent citizens as they are very notorious and we appeal to government to arrest other fleeing members so that peace will reign in Shomolu.”