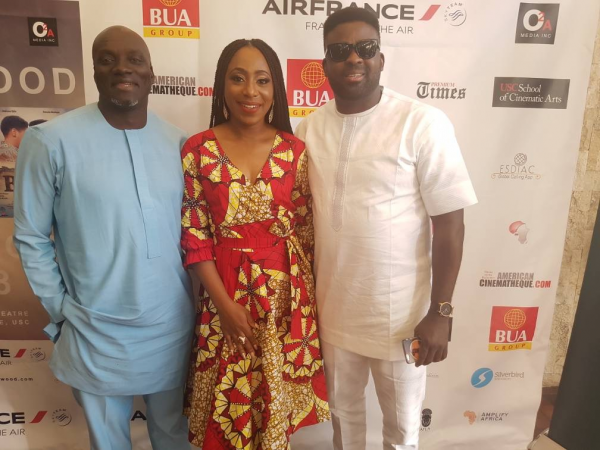 The Nigerian movie industry, Nollywood, made a historic outing to showcase some of Nigeria’s best films – 93 DAYS, THE BRIDGE AND ISOKEN – at Hollywood, Los Angeles.
Thousands of Hollywood tourists from all over the world were held spellbound over the weekend by the spectacular ‘Nollywood In Hollywood’ event.
The event started on Friday at Egyptian Theatre with a star-studded red carpet highlighted by the filmmakers and actors in the films on showcase – 93 DAYS, THE BRIDGE AND ISOKEN.
The inaugural ‘Nollywood In Hollywood’ event was the biggest cultural showcase for Nigeria outside the country in decades, the organisers said.
Nollywood artistes also used the platform to promote Nigeria talents and call for co-productions and technical cooperation between Nollywood and Hollywood.
Jeff Byrd, moderator for the opening night film and Chairman of the African-American Steering Committee of the Directors Guild of America, praised the ingenuity of Nollywood.
Byrd said: “Nollywood seems so far away but there is some curiosity. This is a great event for Hollywood to know more about the Nigerian cinema.
“The film tonight (93 DAYS) is an excellent film, a really good piece.
“There are conversations to be had, for example how can we make it possible for people like Steve Gukas and good Nollywood filmmakers to be a part of the DGA.”
Saturday’s screening was at the reputable Eileen Norris Theatre inside the University of Southern California.
The Theatre, which had hosted films by reputable USC alumni including Ryan Coogler of the Black Panther, George Lucas, John Singleton, Bryan Singer, and Shonda Rhimes among others, was now playing host to Nigerian films.
A late-arriving crowd saw the matinee screening of THE BRIDGE on Saturday, after which its Director, Kunle Afolayan, held the packed audience to an engaging Question and Answer session.
As dusk approached, a standing room only crowd saw the final film on the showcase, ISOKEN, whose theme and subject matter engaged the crowd.
Actress Dakore Akande had a very colourful and stimulating Questions and Answer session with Nigerian-American filmmaker, Ose Oyamendan, after the screening.
In a panel on Nollywood, the Nigerian filmmakers made a point of letting the Hollywood audience and decision makers know that Nollywood grew without government support.
The Nollywood artistes also regretted the lack of Nigerian Government’s presence at the biggest cultural showcase for Nigeria outside the country in decades.
Gwen Deglisse, Director of Programming for The American Cinematheque, operators of The Egyptian Theater, described the ‘Nollywood in Hollywood’ as a huge success.
Deglisse said: “As first events goes, this was a success. We were worried because it is a new territory but Ose was very passionate about giving a platform to Nollywood films.
“Now, we will see how we can make it better. We obviously need more sponsors and hopefully, the Nigerian government can be involved from the next one.”