Why we had flag with Arabic inscription in our ‘office’ — NEMA 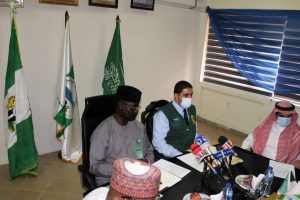 The National Emergency Management Agency has denied claims in some quarters that it hoists a “strange flag” at its headquarters in Abuja.

The News Agency of Nigeria reports that on Tuesday, picture of a flag other than Nigerian flag circulated through various social media platforms.

The agency in a statement signed by Manzo Ezekiel, Head of Press and Public Relations, noted that the claim was false.

He said: “The allegation is false as the agency has not hoisted any ‘strange flag’.

“The Nigerian National Flag and that of NEMA are the only flags in the offices of the agency.

“It is unfortunate that the picture in circulation was taken by suspected mischief makers on Friday at the commissioning of NEMA’s newly upgraded Emergency Call Centre.

“The Centre was upgraded with supports from the King Salman Humanitarian Aid and Relief Centre that has also provided food assistance to persons affected by insurgency in the North East and banditry in the North West in 2018 and this year.

“During the event, it was normal to have flags of Nigeria and that of Saudi Arabia placed behind representatives of the two nations at such a bilateral function.

“More so as it involved the commissioning of the upgraded Call Centre funded by an agency of the Kingdom of Saudi Arabia for the benefit of Nigerians.

“It should be noted that present at the function were representatives of the Embassy of Saudi Arabia and a team from the King Salman Humanitarian Aid and Relief Centre.

“The public is therefore advised to disregard the false alarm and failed campaign of calumny.”