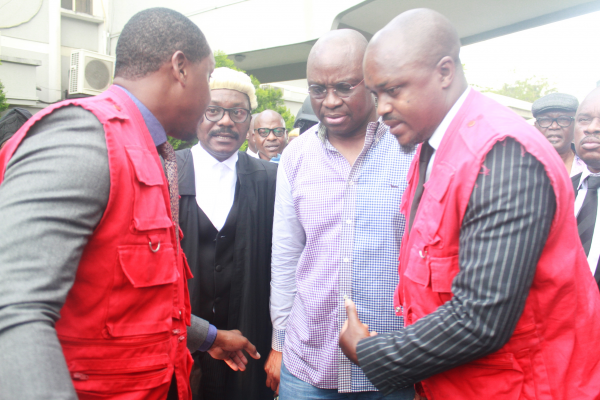 The trial of former Governor of Ekiti State, Ayodele Fayose, continued on Wednesday before a Federal High Court in Lagos, with two of the witnesses called by the Economic and Financial Crimes Commission, telling the court that the names of the former governor; former Minister of State for Defence, Musiliu Obanikoro; and Abiodun Agbele were not on the list of beneficiaries of the fund released by the Central Bank of Nigeria based on payment instruction from the Office of the National Security Adviser.
A former Head of Treasury at the Diamond Bank Plc, Lagos, Olaitan Fajuyitan, told the court that based on the documents before him, which were already admitted as Exhibit E Series, there was no payment to Obanikoro, Fayose and Agbele from the Diamond Bank account of Silva McNamara, the company paid N2.2 billion by the NSA’s Office.
While being led in evidence by the EFCC Counsel, Rotimi Jacob (SAN), Aliyu Mohammed Mukadas, a Central Bank of Nigeria Senior Manager and ex-head Payment Section of the Abuja branch, had told the court that on June 15, 2014, N200 million and another N2 billion was paid into the account of Silva McNamara domiciled in Diamond Bank.
Mukadas said the money was co-authorised by the then NSA, retired Colonel Sambo Dasuki, and a Director in the NSA’s Office, S. A. Salisu, who were signatories to the NSA account.
Giving evidence under cross examination by defence counsel, Ola Olanipekun (SAN), the CBN official said he did not come across the names of Fayose and Agbele while processing the payments.
Olanipekun had asked: “While processing the payment, did he (Fayose) come to you to hasten the payment.”
Mukadas: “No.”
Olanipekun: “In the course of processing the mandate, did you come across his (Fayose) name as beneficiary?”
Mukadas: “No.”
He also said he did not come across the name of Agbele and that he and Fayose were never directors of Silva McNamara Nigeria Limited.
Asked whether from his knowledge of operations of the CBN, due process was followed in the payment to Silva McNamara, he said due process was followed.
While being led in evidence by the EFCC counsel, Fajuyitan had narrated to the court how N1.2 billion was withdrawn from the Diamond Bank account of Silva McNamara through a payment instruction dated June 16, 2014.
However, under cross examination by Olalekan Ojo (SAN), counsel to the second defendant, Spotless Nigeria Limited, Fajuyitan confirmed that it was only signatories to the account of a limited liability company that can give withdrawal instruction and that the names of Fayose, Obanikoro and Agbele did not feature as directors of Silva McNamara.
The witness said while processing the payment instruction from signatories to the account of Silva McNamara, he did not encounter any requests made by Fayose and that he did not see his name on any document relating to the transaction.
He also told the court that the Board Resolution of Silva McNamara with which the Diamond Bank account was opened and operated put the cash withdrawal limit the signatories can make at N3 million.
He read out the names of the board of directors of Silva McNamara as Ezekwe Ikenna with 700,000 shares, Idowu Oshodi with 299,000 shares and Elizabeth Adebiyi with 1,000 shares.
The witness also read to the court signatories to the account of Silva McNamara as Olalekan Ogunseye and Theresa Matuluko.
He said Diamond Bank complied strictly with Silva McNamara’s payment instruction of June 16, 2014, which authorised payments to six identified beneficiaries.
He read out the six beneficiaries to which the said sum of N1.2 billion was paid as Santuraki Bello (N200 million), Yusuf Bulama (N120 million), Chimenum Njoku (250 million), Josiah Moses (N280 million), Abubakar-Sadiq Zanna (N200 million) and Franklin Tolani (N150 million).
Asked whether Diamond Bank, in complying with the payment instruction of June 16, 2014, did so after due diligence, Fajuyitan said: “Yes.”
When he was asked by Ojo whether Diamond Bank will do anything against the payment mandate made by its customers, the witness said: “I don’t think they will.”
Earlier, the trial judge, Justice Chukwujekwu Aneke, had ruled against EFCC counsel’s move to get the witness who contradicted himself on Tuesday to explain why his testimony of was different from what he said before Justice Olatoregun during the aborted trial.
Dr. Abiodun Oshode, a Zonal Head of Zenith Bank, had said under oath while giving evidence before Justice Mojisola Olatoregun on October 19, 2019 that Taofeek, who was alleged to be involved in the movement of about N200 million cash from Afao Ekiti to the Zenith Bank branch in Ado Ekiti, did not personally fill the deposit slips for lodgement of the cash because he does not know how to read and write.
On Tuesday, however, Oshode contradicted himself by telling the court that he has never met Taofeeq and he did not know why he didn’t fill the tellers by himself.
The EFCC counsel had attempted to use the advantage of re-examination to get Oshode to explain why he gave evidence different from what he said before Justice Olatoregun, which was objected to by Ojo.
Delivering his ruling on Wednesday, Justice Aneke said there was no ambiguity in the evidence of Oshode and aligned himself with the objection of Fayose’s counsel.
The case has been adjourned till October 25 for continuation of trial.