No fears about Sweden – Garba

The Golden Eaglets’ Head Coach, Manu Garba, has said he remains confident that his wards would deliver the goods yet again in Tuesday’s semi-final decider against Sweden at the Rashid Stadium in Dubai.
“All my life, I have never entertained any fear and I don’t even know what fear means,” posited Garba when pressed at a press conference. “Of course, I know that whatever happens is ordained by God, so I have no fear about Sweden.”
For Nigeria and Sweden, it would be a battle of familiar foes after their pulsating 3-3 draw in the preliminary Group F at the Bin Khalifa Stadium in Al Ain.
While Nigeria eventually topped the section with seven points, Sweden sneaked into the next round of the competition as one of the best first round losers after coming second with four points behind Mexico who had six.
“Group F was the most competitive at this tournament,” maintained Garba. “Though the Swedes are a good technical side, I’ll still rate Mexico ahead of them for obvious reasons.
“Mexico beat Sweden 1-0 in the group and that was the same team that we beat 6-1, which shows that the Mexicans are a very good side because they are also in the semi-finals too.”
Speaking specifically about Tuesday’s winner-takes-it-all encounter against Sweden in Dubai, Garba said his confidence was borne out of the fact that his players have strong mental ability to deal with whatever the Swedes would throw at them.
“As an interim coach in 2007 when we were about leaving Nigeria for the World Cup in Korea, I told Nigerians that it’s the cup or nothing and I still maintain the same thing now because this team has come a long way and we cannot afford to fail,” he explained.
Speaking briefly, Akinjide Idowu, who is ruled out of the game as a result of two yellow cards, said the confidence of the coaches in the players have rubbed off on the entire team so much so he would not be sorely missed against Sweden.
Idowu said: “I feel sad that I won’t be playing against Sweden but that would not change anything because we have others who can do the job.
“Like the coach has said, we have so much confidence going into this match and by the grace of God, we are going to win.” 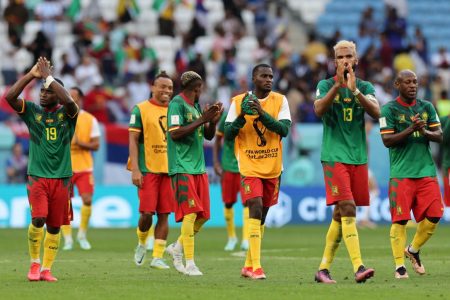