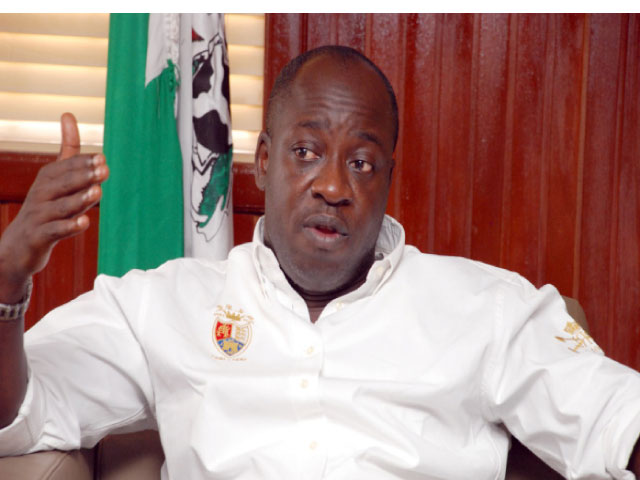 The Minister of Sports, Bolaji Abdulahi, was the surprise guest at Saturday’s morning training session of the Super Eagles at the training pitch of the National Stadium in Abuja along with the President of the Nigeria Football Federation, Alhaji Aminu Maigari; the Secretary of the NFF, Barrister Musa Ahmadu; and the Technical Director, Dr. Emmanuel Ikpeme.
Abdullai, whose office is now situated within the precinct of the National Stadium, breezed in unannounced midway into the morning training session that usually commences at about 6:45am.
He took time to enjoy the training session and thereafter addressed the players.
Addressing the players, Abdullai, who was clad in white and green national track suit, told the team that President Goodluck Jonathan is interested in the welfare of the team and has asked him to offer his total support to the team as the countdown to the Nations Cup draws near.
He also took time off to clear the air regarding the desperation in some quarters that the Super Eagles must win the Nations Cup or the team will be disbanded.
He said: “There is no form of pressure coming from the Presidency or my humble self but I have the belief in this team that they will do the nation proud at the Nations Cup.
“But we want the team to be relaxed and offer the best challenge when the competition starts in January.”
The minister also promised to be personally in Faro, Portugal, where the team will camp for the championship to offer his support to the team ahead of the championship.
He declared that he has absolute confidence in the ability of the team to represent Nigeria creditably at the tournament.
Maigari spoke in the same vein, but was more emphatic as he declared that he has total confidence that all things being equal the Super Eagles will emerge champions when hostilities commence at South Africa 2013.
The Super Eagles Head Coach, Stephen Keshi, thanked Abdullai for the visit and said he would be welcomed in Faro, Portugal.
Keshi promised that the team will not let the nation down during the Nations Cup.
Home Eagles Skipper, Chigozie Agbim, said the minister’s visit was a morale booster, while winger Ejike Uzoenyi said such visit will help the team prepare hard for the Nations Cup championship.