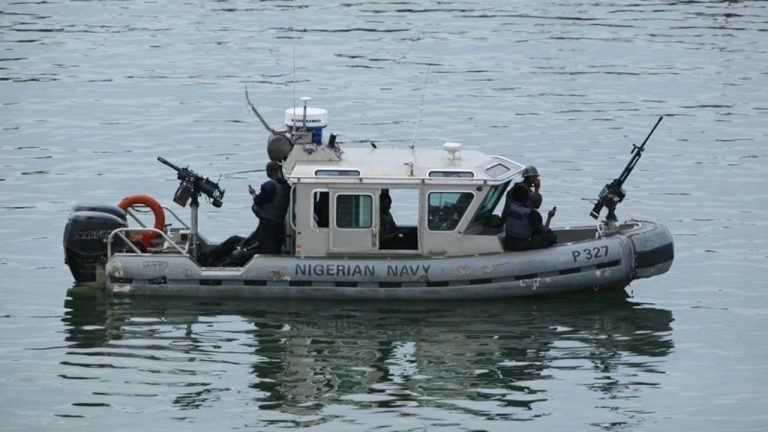 The Nigerian Navy has accused the Nigerian National Petroleum Corporation Limited of not revealing the true cause(s) of crude oil theft in the country, but reeling out exaggerated figures to save its face.

According to Sunday PUNCH, the Navy Chief of Training and Operations, Rear Admiral Solomon Agada, revealed this.

Sunday PUNCH said Agada spoke when he appeared before the Senate Committee on Economic and Financial Crimes during an interactive briefing of the relevant agencies implementing the Proceeds of Crime (Recovery and Management) Act, 2022 at the National Assembly.

Agada revealed that at several interactions with the NNPC, the Navy had explained the causes of fuel scarcity to the company that there was no way anyone would steal 100,000 barrels of oil in a day, but the national oil firm had deliberately continued to mislead Nigerians.

He made the disclosure when the Chairman of the committee, Senator Suleiman Kwari, questioned him on why the country continued to experience cases of oil theft if the waterways were secured as Agada posited.

Kwari queried: “The oil theft issue has been a very worrisome one to every Nigerian and more importantly, it has negatively impacted our economy.

“How come the Navy hasn’t been able to solve the issue of oil theft and if the Navy is claiming that the waterways are secured, why are there still cases of oil theft?”

Agada explained: “The challenge is that because of the criminal activity inshore by the illegal refiners in tapping into the export lines, those export lines have not been in operation since early this year.

“The major terminals have not been able to process fuel for export since around February/March and instead of the NNPC telling the Federal Government that this product is not brought out to be able to process as export, they say the oil was stolen.”

He explained that the argument of the Navy had been that the NNPC should tell people the difference between the oil that they have shut in and not brought out, and what is being stolen.

He added: “The stolen produce that we have been dealing with among illegal refineries is nothing compared to what the NNPC is declaring as being stolen.

“If you’re talking about stealing 100,000 barrels a day, you need about five-tonne batches 20 times a day from the creek to the high sea, which is very unrealistic.

“I told them at the NNPC that if that were to be the case, even a blind man would observe that something was happening in Nigeria’s waters and we are there on patrol and not seeing this.

“The only reasonable explanation why the fuels are not coming out is because the Shell platform on Bonny Island is not exporting and the Chevron terminal in Escravos is also not exporting.

“Let’s get someone who can do proper analysis of these figures and we’ll find out that these claims are just bogus; there is nothing substantive about them.

“We have communicated appropriately with the NNPC; even at our last interface with them, they agreed with us, but when they come to the public, they say oil theft, hiding the fact from the public.”

Senator Yusuf Yusuf noted that at an oversight function, the NNPC said crude pipelines were being tapped from the pressure pipe under sea and crude oil was usually transferred from there into vessels, and this had been happening for nine years.

Yusuf asked: “Is the Navy aware or not of the tapping going on under the sea?”

Agada responded: “On the tapping of the vessel, I also visited that location with the Chief of Defence Staff and there is a directive by the President from the Office of the Secretary to the Government of the Federation to set up a committee on that particular incident.

“We are not indicting the NNPCL; we are just saying that let matters be presented correctly so that people can make informed decisions.

“The Navy has no hand in any stealing of oil in this country.

“I have no ship or vessel, nor do I know anyone who has; you can investigate me.”

The Navy boss further explained that the increase in diesel price was because of the operation in stopping illegal bunkering on the waters.

Agada said: “People who have been doing this illegal business will confirm to you that since we started this special task force operation in April, their business has gone sour.

“This is also responsible for the increase in diesel price in the country.

“Since we stopped the illegal diesel from coming to the market, the price has gone up, because once there is high demand and the supply is low, the price will go up.

“People who ought to import will cut corners and buy the illegal products, but now that they can’t import and the illegal ones are not coming, this has reduced the quantity in the country.

“But somehow, nobody is coming to share this information with the people.”

He added that the Federal Government had invested in infrastructure through the Maritime Domain Awareness Infrastructure, which had assisted the Navy in detecting and arresting illegal refiners and vessels that were usually handed over to the Economic and Financial Crimes Commission for prosecution.

Agada stated: “And right from Abuja here, we have the capacity to see the entire Nigeria Exclusive Economic Zone.

“We have 24 hours watch on the exclusive economic zone.

“Any vessel that enters Nigerian waters that is not permitted to be is immediately arrested because we see their movement.

“Any vessel in the international waters is expected to have their Automatic Identification System on and that shows that you’re transparently operating; so, any vessel that switches off its identification system automatically becomes a vessel for the Nigeria Navy and we will immediately arrest them and thereafter investigate.

“So, as of today, there is no tanker that can enter Nigerian waters to carry anything without being noticed.

“All these things that happened now have sent a very strong signal to the international communities that Nigeria is now a place where illegal activities can’t take place anymore.”

Earlier in his speech, the Chairman of the committee noted that the session was an oversight function of the Senate to oversee the agencies and check on their revenue generation.

Kwari said: “As part of our oversight duties, it has become imperative to ascertain your organisations’ level of compliance with the specific provisions of this Act with due respect to the actual laid down procedures on how you are to handle and dispose of forfeited assets.

“A cursory look at the submissions so far indicated a wide gap between the reserved prices and competitive bid offers if the items were exposed to the general public through licensed auctioneers.

“This disposal process is meant to generate revenue for the government and should be seen as such.”

According to Sunday PUNCH, the Group General Manager, Group Public Affairs Division, NNPC, Garba-Deen Mohammad, could not be reached for comments.

The newspaper said Mohammad did not take calls placed to his phone and had not replied a text message sent to him on the matter as of the time of filing the report.