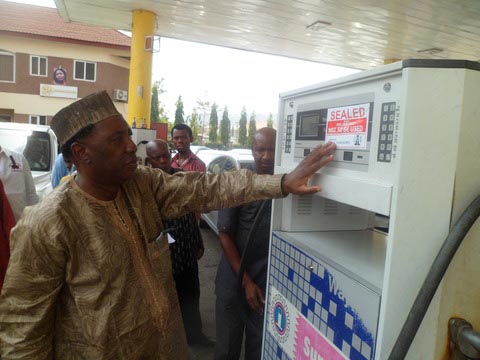 The Weights and Measures Department of the Federal Ministry of Trade and Investment had sealed the petrol stations of AYM in Shafa Gundu District, M. Major Oil and Gas in Mborra and NNPC Mega Station, Gwarinpa, all in the Federal Capital Territory, Abuja for under-dispensing petroleum products to customers.
The discovery of the under- dispensing of fuel was made during the inspection of filing stations carried out by the Weights and Measures Department, led by its Director, Alhaji Bashir Zoro.
During the inspection at the AYM, Shafa filing station, Gundu District, it was discovered that the dispensing pumps at the station was short by 0.8 litres for every 20 litres of PMS (19.2 as 20 litres) and Diesel 0.95 litres less for every 20 litres (19.05 as 20 litres).
At the M. Major Oil and Gas in Mborra, 1.6 litres for every 20 litres (18.4 as 20 litres).
The NNPC mega station, Gwarinpa created a drama on sighting the Weights and Measures officials and called their sales attendant to hide from the team before disembarking from their vehicle when it was obvious that they were dispensing PMS to customers on a long queue before the arrival of the officials.
The officials of the filing station refused to switch on their dispensing pumps and started making excuses about power supply.
They equally refused to put on their generator.
After a while, Zoro ordered the sealing of the dispensing pumps at the filing station.
Zoro while addressing journalists at the NNPC Mega Station, said that it was extremely disappointing that motorists were being shortchanged at the filing station.
He said the department will continue to embark on such exercise in order to establish that marketers conform with standards.
He said that the objective of the inspection was to checkmate unscrupulous businessmen from unfair trade practices and safeguard the interest of consumers and producers alike.
He said: “It is extremely disappointing that motorists are being shortchanged.
“We would not relent in our official duty to ensure that marketers conform to integrity, fairness and accuracy in dispensing PMS to customers.
“We shall continue to use the media to educate marketers and the general public so that they would be alert to the need to become conscious of measurement and standards as law prescribed.”
Other filing stations inspected by the team were AP filing station in Apo and Oando in Gadua and Jabi.
They were requested to come with their verification certificate while Oando in Jabi had its dispensing pumps accurate and fair.