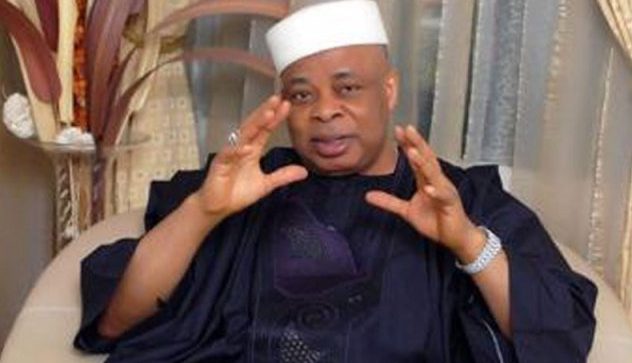 President Muhammadu Buhari has lauded former Senate President, Ken Nnamani, for the role he played in stabilising the nation’s democracy while presiding over the Senate.

Buhari spoke at the launch/public presentation of the book: “Standing Strong:Legislative Reforms, Third Term and Other Issues of the 5th Senate,” written by Nnamani.

Represented by the Minister of Science and Technology, Dr. Ogbonnaya Onu, President Buhari said but for the courage of Nnamani and his colleagues, the seamless transfer of power in 2007 would have been difficult, if not impossible.

He said: “We thank Senator Nnamani and his colleagues at the National Assembly for standing strong in carrying out their constitutional duty in the defence of democracy in our dear country, Nigeria.

“We have had a president handed over power to another president elected on the platform of the same political party.

“Our democracy is growing and can be said to be matured.

“Though we have multiple political parties, two are dominant as they both have presence in each of the six geopolitical zones of the country.”

Osinbajo said: “He (Nnamani) is a man that truly loves the nation.

“He wants to serve, but he is not desperate, which informs why at the risk of losing his Senate Presidency, he stood his ground.

“Your role in our national life is just beginning.”

The Chairman of the occasion and former Minister of Defence, General Theophilus Yakubu Danjuma (retd), while congratulating the author, lamented what he called the lack of commitment in documenting for posterity, happenings that defined the nation’s history at one point or the other.

Danjuma said: “The book is a classic history of a country and we have the unfortunate habit of not valuing  and preserving our history.

“The result is that the lies and the distortions that hit the headlines survive.

“So, I want all of you, if you forget everything this morning, you mustn’t forget the fact that the records of what really happened have been documented and everybody should try and possess it, read it and look out for witnesses.”

Earlier in his welcome address, the author said he chose to write the book to underscore the importance of adhering to dew process, saying: “Let’s present to Nigeria and leaders of the African continent the simple truth that for democracy, political stability, and economic development to flourish in Africa, we must strive to maintain due process. Due process is the heart of the rule of law and democracy.

“In 2007, this principle prevented a possible truncation of democracy. Because we stood strong on due process, the bid to extend President Olusegun Obasanjo’s Presidency’s beyond the constitutional limit, failed.

“Eternal vigilance is the price of democracy and liberty. Our vigilance for democracy requires that we learn from our history, a history of success and failure. This is why I wrote this book: to remind us of the dangerous path we could have taken but for the vigilance and courage of some legislators and to challenge us to never abandon the responsibility of protecting due process for our democracy to survive.

“Our democracy was tested in 2006, it passed. It was tested again in 2015 and passed. This has culminated in the Buhari Presidency. The crucial 2015 test would not have been if we failed the 2006 test. The 2006 test was a test of whether leaders will rise above fear and the politics of the strongman to strengthen democracy by upholding due process.

“It was a test of solidity of our legislatures. The 2015 test was a test of whether a ruling political party and an incumbent President will have the grace and patriotism to accept political defeat and allow the opposition to form a new government. This was not a simple test. Many African countries failed this test. The result of such failure is the collapse of national consensus and retreat into authoritarian politics with its attendant political instability and economic stagnation.

“We owe it to the integrity, courage and steely determination of President Muhammadu Buhari and the humility and graciousness of President Goodluck Jonathan that Nigeria reached the important milestone of countries that have consolidated democracy by peacefully transferring power to the opposition.

“We have to acknowledge the persistence of President Buhari to continue to peacefully contest for the Presidency in different electoral cycles. He was not deterred by previous disappointments, including manipulation of the electoral process. He placed his trust and confidence in the sanctity of the ballot box and believed that deliberation, persuasive, and ruIe-based conducts are the recipes for democratic governance.

“Let us also commend President Jonathan for overcoming the ever-present temptation amongst African leaders who refuse to leave power and find a way to scramble the electoral results even when they have lost clean and square.

“Such dare-devilry has thrown their countries into utter instability and chaos. We should be grateful that these two leaders helped us overcome the storms in 2015. Their exemplary leadership has made Nigeria a shining light in consolidating democracy.

“But we have to remember that the challenges of democracy never end and the work of consolidating democracy is ever recurrent. As we move forward as a nation, we will confront challenges that call for wisdom, courage and collaboration.”

The event was attended by prominent Nigerians, including Secretary to the Government of the Federation, Boss Mustapha; Minister of Niger Delta Affairs, Senator Godswill Akpabio; Ooni of Ife, Adeyeye Ogunwusi; and representatives of the Emir of Kano and Obi of Onitsha.