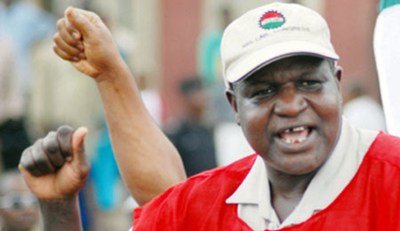 The Nigeria Labour Congress on Sunday condemned the withdrawal, few days ago, of the security aides of the Speaker of House of Representatives, Alhaji Aminu Waziri Tambuwal, by the acting Inspector-General of Police, Suleiman Abba.
The union described the act as shameful, distasteful and unconstitutional.
It further tagged that action of the acting IGP as a demonstration of the government’s parochial sense of power and very little knowledge of history.
The NLC therefore demanded the immediate restoration of Tambuwal’s security details as well as all the rights and privileges that accrue to the office of the Speaker.
The union, a statement by its General Secretary, Dr. Peter Ozo-Eson, warned that nothing should happen to Tambuwal
The statement by the Union reads: “We at the Nigeria Labour Congress are appalled by the withdrawal of security details of the Speaker of the House of Representatives, Alhaji Aminu Tambuwal, ostensibly because he had decamped to the All Progressives Congress .
“The act is shameful, distasteful, unconstitutional and demonstrates our parochial sense of power and very little knowledge of history.
“No part of the constitution of the Federal Republic of Nigeria says the Speaker of the House of Representatives should come from the majority party.
“Section 50(1)(b) only says, There shall be …a Speaker and a Deputy Speaker of the House of Representatives, who shall be elected by the members of that House from among themselves…”
“In the Second Republic, the Honourable Speaker of the House of Representatives, Chief Edwin Ume-Ezeoke was elected from the ranks of NPP, not just an opposition party but the third strong, after UPN and NPN. We have other precedents across the world.
“We find it appropriate to cite the examples of Mimiko and Ali Modu-Sheriff, governor of Ondo State and former governor of Borno State respectively. Their security details were not withdrawn when they decamped to the Peoples Democratic Party (PDP).
“It gives us concern that our political leaders are determined to learn very little about democracy and always seem too keen to overheat the polity over things that count for little.
“The police and other security agencies who are in complicity in this disgusting conduct should hold their heads in shame. Herein lies the essence of strong institutions which we have always advocated.
“For those who take pleasure in converting to personal use, public/state institutions, today’s men will soon become yesterday’s men. What goes around, comes around.
“In light of the foregoing, we demand immediate restoration of Tambuwal’s security details and all the rights and privileges that accrue to the Office of the Speaker.
“It is not about Tambuwal, it is about the office which he holds.
“And in any case, only few, arguably, will contest that he has not discharged and acquitted himself as speaker.
“We would like to be on record that we will not fold our hands while little minds threaten our hard-earned democracy. Nothing should happen to Tambuwal.”