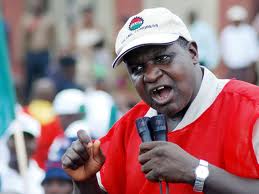 The Central Working Committee of the Nigeria Labour Congress has suspended its plan to go on strike beginning from Wednesday (today).
The strike was to protest what labour considered some unfair practices by the government, including the stoppage of check off dues for pensioners.
Organised labour, however, promised to resume the strike without warning if the government does not fulfill its promise to meet its demands.
In a statement on Tuesday, the NLC said: “The Central Working Committee (CWC) at its meeting today, Tuesday April 9th 2013 notes as follows:
In consideration of the fact that the Federal Government has sufficiently met with the demands of the Congress and National Union of Pensioners (NUP), “Including the setting up of a joint Committee headed by the Secretary to the Government of the Federation to harmonise payments as well as resolve sundry matters connected with pension payment and administration of pension funds; CWC resolves to:
“Suspend forthwith the work stoppage/protest march billed to take place on Wednesday, April 10 in Lagos and Abuja;
“Resume without warning the suspended action if by the end of April or there about, the Federal Government fails to implement all it has promised to do.
“Congress wishes to commend its workers and civil society allies for promptly mobilizing for this action.
“It will be called that, at the joint meeting with the Congress and the Trade Union Congress on Monday night, April 8, 2013, the Federal Government among other things:
“Accepted to restore the check-off dues of the NUP which had been withheld for one year;
“Ordered the withdrawal from the court the case between the Federal Government of Nigeria (FGN) and NUP in respect of the pension payment/matters;
“Set up a joint Committee of Labour and Government, headed by the Secretary to the Government of the Federation (SGF) to resolve all issues pertaining to:
“Immediate payment of all pension arrears to deserving pensioners;
“Revisitation/resumption of inconclusive verification exercises of 2010/2011 that left scores of pensioners off the payroll;
“The review of pension payment to reflect 53.4% wage increase to workers in 2010 and the payment of the N18,000 minimum wage.
“Perfect and fast-track the process of pension payment.
“The committee has till the end of April or first week of May at the latest to complete its work.”
The statement was signed by the NLC President, Comrade Abdulwahed Omar; and the union’s acting General Secretary, Comrade Chris Uyot.”