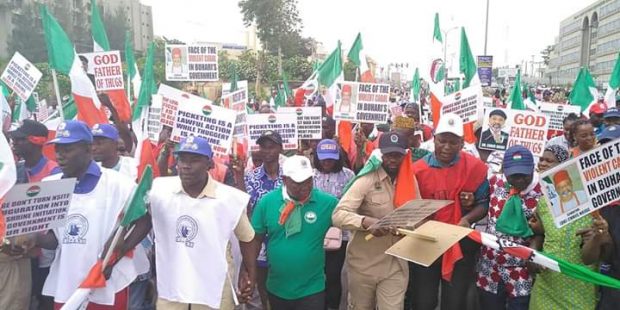 The Organised Labour on Monday protested the infringement of workers’ rights by Senator Chris Ngige, the Minister of Labour and Employment.

Ayuba Wabba, the President, Nigeria Labour Congress, said the protest was to express their grievance against workers’ treatment during a rally at the residence of Ngige on Wednesday in Abuja.

The protesting workers held placards with inscriptions like: Workers rights to peaceful protest and picketing are not negotiable; and Picketing is lawful while thuggery is a crime.

The NLC alleged that the minister replaced the name of Chief Frank Kokori with Austin Enejamo-Isire as chairman of board of the Nigeria Social Insurance Trust Fund.

The picketing of the minister’s residence by the labour using two petroleum tankers to block the entrance and exit points had resulted to clashes between alleged thugs and the labour officials.

The labour, who vowed to ensure the inauguration of Kokori as NSITF chairman, had called for international labour actions against the minister over the incident.

However, a statement by Femi Adesina, the Special Adviser to the President on Media and Publicity, in Abuja on Sunday expressed regret over the misunderstanding between the labour and the minister on the matter.

The statement also clarified that Enejamo-Isire was appointed as Chairman NSITF board by President Muhammadu Buhari and the inauguration of the board was scheduled for May 13.

Wabba, however, said that workers should not be denied the right to picket to address irregularities.

He said: “I think we will be so happy that Kokori being one of us has exhibited a very transparent life that the political elites and the anti-political system are actually afraid that he is going to exposed a lot of things.

“If there has been corruption in the system, we need somebody that is anti-corrupt to stop the corruption and also address the issues.

Also, Prof Biodun Ogunyemi, President of the Academic Staff Unions of Universities, said attack on workers was an attempt to erode democracy in Nigeria.

Ogunyemi said: “We need people that can call leaders to account for their actions.

“The government on its own approached Kokori in order to pudge NSITF of corrupt tendencies.

“We call on President Buhari to set up a powerful investigative panel to investigate the attack on workers.”