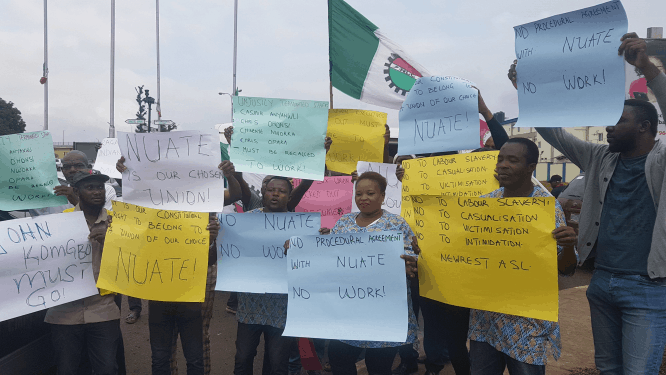 The Nigeria Labour Congress on Tuesday picketed the operations of Newrest Aviation Services Limited, an in-flight catering company, at the Lagos airport for allegedly preventing its employees from joining unions in the aviation industry.
The News Agency of Nigeria reports that NLC and National Union of Air Transport Employees had in the early hours of Tuesday barricaded the entrances to the company and grounded all its operations.
They carried placards with various inscriptions such as” “Section 40 of the Nigerian Constitution Must Be Obeyed”; “Workers have right to the union of their choice’’, and “No procedural agreement with NUATE, no work, NUATE is our chosen union”.
Other placards read: “No to labour slavery; ” No to casualisation; No to intimidation; No to victimisation of workers at Newrest ASL; “Unjustly termination of workers must be recalled”.
Commenting, Funmilayo Sessi, State Chairman, Lagos State Council of NLC, said the congress mobilised its members to fight the injustices melted out to workers of the Newrest ASL by the management.
She said: “The workers and the unions have been on this course for the past three years, but the management remain insensitive to the plights of its workers.
“The action of the company is anti-workers, because the environment where the workers are working is not even conducive for them to perform their work effectively.
“As a worker in a company, it is stated in the Nigeria Constitution 1999, Section 40 as amended, that there should be freedom of association.
“The workers say they want to join NUATE since the company is licenced by NCAA to cater for in-flight catering service of passengers which is synonymous with the trade they are doing.
“However, the company is insisting that they must join the National Union of Hotels and Personnel Service Workers which is against the Labour laws of our land.”
Sessi said, as a labour congress, NLC would always come out to protect the rights and privileges of workers that would give equity and correct any injustice.
She said that these two unions, NUATE and NUHPSW, were of the same parent with NLC and it was not on the side of any union.
Sessi said NLC wants the company to respect the wishes of the workers.
She added: “We are on the side of the workers in this course, because NUATE will not go to any catering company at the airport that does not have anything to do with aviation.”
Sessi said that workers unionisation with NUATE would add value to their productivity, because the union was closer to the workers to give them moral advice to perform their jobs effectively.
She said: “I expect the company to tell the two unions that it does not have any vested interest as to which the workers will associate with, but to belong to anyone that will protect their interest in the course of their jobs.
“If the workers belong to the two unions, I do not think it is too much considering the number of workers they have in the company.”
The labour leader said that NLC would be willing go on a roundtable with the company, if it was ready for dialogue on how to resolve the lingering issue.
She, however, urged the company to come on the table with an open mind, fairness, equity, and should be enlightened about the freedom of association in the trade that was synonymous with what it was doing.
Also, the General Secretary, NUATE, Ocheme Aba, told NAN during the picketing that the company does not have the right to decide for its employees the union it must belong to.
Aba said that the company had prevented NUATE from representing the workers to fight their interest, and so, it was holding the workers into slave labour conditions.
He said: “The picketing by NLC and the union is as a result of the refusal of the company to comply with the constitution, the labour law and several court judgments.
“The Industrial Court had ruled that the company has no say, whatsoever, in the affairs of membership of trade union by the company’s employees.
“However, the company is insisting that they must decide the trade union the workers must belong.
“The choice to belong to NUATE comes from the workers. These workers have made their choice to NUATE and they have said so in writing.”