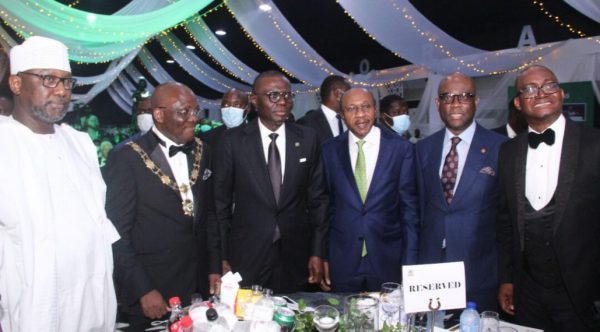 Emefiele said this at the 56th Chartered Institute of Bankers of Nigeria Annual Bankers Dinner in Lagos on Friday.

According to him, the apex bank’s in-house model shows a continued and strong rebound of the domestic economy.

“CBN’s in-house model, after an exhaustive simulation with various oil price possibilities and numerous scenarios of other macroeconomic metrics, indicates a continued and strong rebound of the domestic economy,” he said.

Emefiele said the near-term outlook of the country’s economy is brightening significantly, with improvements projected into the short and the medium term.

He said the real GDP growth rate is projected to remain robust and strengthen within the short term.

“Short-term projection indicates a continued strengthening of the growth rate.

”Deliberate structural policies and reforms are needed to raise these projected trend higher towards the desired 5 per cent average growth level.”

Emefiele said that output growth rate for the Nigerian economy is estimated by key institutions to consolidate in 2021.

He said International Monetary Fund and World Bank project real growth rates of 2.6 per cent and 2.4 per cent respectively, while the Federal Ministry of Finance and National Planning estimates stand at 3.0 per cent.

He said: “Generally, real GDP growth rate is projected to remain robust and strengthen within the short term, regardless of the immanent vulnerabilities.

“With this continued strengthening, real GDP could recover beyond the pre-pandemic levels by 2022. Q1.

”Further simulations of the medium-term projections suggest that Nigeria’s real GDP could surpass pre-COVID trends by 2024.”

On Inflation rate, the CBN Governor said that headline inflation rate is expected to moderate to 15.35 per cent and 14.91 per cent by December 2021 and February 2022 respectively.

Emefiele said that food inflation is also expected to fall from 19.57 per cent to 17.26 per cent and 16.58 per cent over the same period.

He said domestic disinflation is projected on the backdrop of favourable impact of various CBN interventions on real sector and gradual upscale of economic activity, expected to keep prices moderate in near-term.

On Foreign Exchange reserves, Emefiele predicted that the country’s external reserves might surpass $42 billion by mid-2022 from $41.5 billion in 2021 Q3.

He attributed the steady increase in external reserves to the dynamics of oil price and foreign exchange demand for import.

He said: “Generally, external reserves is expected to be at relatively comfortable levels with expectation of sustained trend of current crude oil price, impact of Eurobond Issuance and stable exchange rate condition.”

Governor Babajide Sanwo-Olu of Lagos State said the CBN under Emefiele’s leadership left no stone unturned to ensure that credits were given to Small, Medium and Large businesses in the country.

“I stand here as a major beneficiary of the can-do spirit that the Nigerian banking sector has shown us,” he said.

Sanwo-Olu thanked the banking stakeholders for ensuring that they collaborate and put COVID-19 pandemic behind.

He added that this has led to knowing the importance of the banking sector to the growth of the economy.

The governor said that credit is important and has shown its power to deepen Nigeria’s struggling economy in the face of COVID-19 pandemic and disaster.

“Nigeria cannot be an exception, we must continue to brainstorm on how we can reduce cost of credit and burden to our beneficiaries,” Sanwo-Olu said.

Olugbemi said: “Worthy of note is the improvement, though slight, being witnessed in the exchange rate of the Naira.

“I wish to call for its sustenance.

“We are certainly working in interesting times with global growth rate at its lowest and traditional norms being challenged on a daily basis.

“I would also like to congratulate the CBN Governor on the official lunch of e-naira, Africa’s first Central Bank Digital Currency, which principal aim is to deepen financial inclusion and integrate millions of unbanked Nigerians into the banking system.

“Whilst the modality for the operation is being fine-tuned, I have no doubt in my mind that it is a welcome development and a step in the right direction.”

The News Agency of Nigeria reports that Annual Bankers’ Dinner provides an atmosphere for stakeholders to reflect on the developments in the banking industry and economy over the past year while gaining insights into the incoming year.

It is also an event where stakeholders in the banking industry and key economic, regulators, operators, government, customers and business society are afforded the opportunity to socially network.