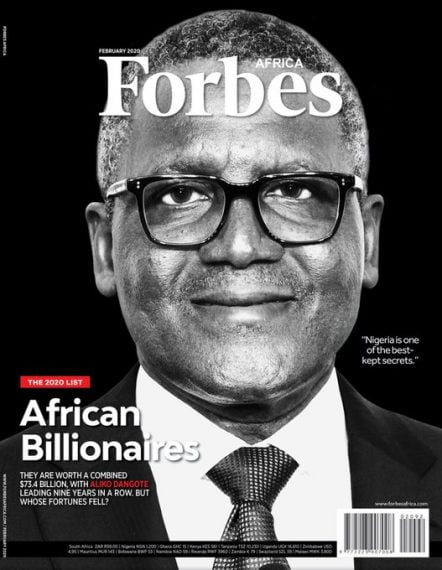 After a year in which COVID-19 ravaged the world and hit economies badly, only three Nigerians: Aliko Dangote of the Dangote Group, Mike Adenuga of Globacom and Abdul Samad Rabiu of BUA Group, appeared on the 2021 annual Forbes Ranking of billionaires ranking 1st, 5th and 6th respectively in Africa with networths of $12.1 billion, $6.5 billion, and $5.5 billion respectively.

In the world, Elon Musk of Tesla became the world’s richest person, overtaking Jeff Bezos of Amazon due to surging share price of Tesla.

According to Forbes: “Africa’s 18 billionaires are worth an average $4.1 billion, 12% more than a year ago, driven in part by Nigeria’s surging stock market with Aliko Dangote retaining his place as the continent’s richest at $12.1 billion, up by $2 billion from last year’s list thanks to a roughly 30% rise in the share price of Dangote Cement, by far his most valuable asset.

“The biggest gainer in Africa this year is another Nigerian cement and manufacturing tycoon, Abdul Samad Rabiu of BUA Group. Remarkably, shares of his BUA Cement PLC, which listed on the Nigeria Stock Exchange in January 2020, have doubled in value in the past year. That pushed Rabiu’s fortune up by an extraordinary 77%, to $5.5 billion.”

Unlike last year, there are no women from Africa in this year’s list with Forbes calculating that the fortune of Folorunsho Alakija of Nigeria, who owns an oil exploration company, dropped below $1 billion due to lower oil prices.

The 18 billionaires from Africa hail from seven different countries.

South Africa and Egypt each have five billionaires, followed by Nigeria with three and Morocco with two.

Altogether, they are worth $73.8 billion, slightly more than the $73.4 billion aggregate worth of the 20 billionaires on last year’s list of Africa’s richest people.

Speaking on the method of selection, Forbes said: “Our lists tracks the wealth of African billionaires who reside in Africa or have their primary business there, thus excluding Sudanese-born billionaire Mo Ibrahim, who is a U.K. citizen and billionaire London resident Mohamed Al-Fayed, an Egyptian citizen. Strive Masiyiwa, a citizen of Zimbabwe and a London resident, appears on the list due to his telecom holdings in Africa.

“We calculated net worths using stock prices and currency exchange rates from the close of business on Friday, January 8, 2021. To value privately held businesses, we start with estimates of revenues or profits and apply prevailing price-to-sale or price-to-earnings ratios for similar public companies. Some list members grow richer or poorer within weeks-or days-of our measurement date.”

The Forbes annual list of billionaires is the World’s most comprehensive billionaires ranking in the world and is calculated based on net worth using stock prices and currency exchange rates from the close of business on January 8, 2021.