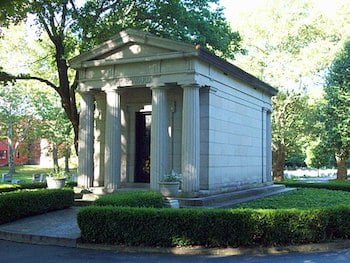 Nigerians within the South-West region, have expressed divergent views on the values of Mausoleums to family members of the departed ones and the society in general.

The respondents across Osogbo, Abeokuta, Ibadan and Ado-Ekiti, in separate interviews with the News Agency of Nigeria (NAN) on Sunday, also expressed their views on the socioeconomic importance of Mausoleums.

Mausoleums are special buildings, built in style to accommodate graves of the beloved ones. And such buildings, which could be made public or private, are managed for religious, social, historical and economic purposes.

In Osogbo, the Osun Commissioner for Culture and Tourism, Adebisi Obawale, said though, the state did not have any Mausoleum, it has graves of the traditional warriors, who fought the Kiriji War from 1877 to 1893.

Obawale said that the state government was working with the cultural and traditional rulers with historical monuments and artifacts to preserve and turn them into attractions for tourists.

“Currently, we are working on the Ogedengbe Palace, where an Ijesa Warrior, Ogedengbe, was buried.

“We intend to give it a befitting look and to affiliate it with the Kiriji War site.

“There will be a tour arrangement where tourists end their tour of the Kiriji War site at the Ogedengbe Palace.

“Similarly, in Ika (Ejigbo), there is a special place where ancient kings in the community were buried; we are doing a restoration of the place (grave site).

“We have plans to link the grave to a museum, so as to showcase the rich culture of people of the area,” he said.

According to Obawale, the state government launched a tourism master plan in 2020, and is working to turn graves and houses of prominent people in the state to tourist centres and museums.

Also, the Yegbata of Oodua, Chief Saka Awojoodu, said that more than 5,000 tourists had visited historical sites in Ile-Ife, from January till date.

Awojoodu said that historical graves of the late four royal fathers were within the premises of the Ooni’s Palace in Ile-Ife.

“Things like these should be kept for generations to come, for remembrance and for them to know the history of the past heroes,” Awojoodu said.

Commenting, a Human Capital Developer, Charles Adeyemi, who is the Executive Director, Charleston Foundation and Associates, commended the Federal Government on its efforts at renovating abandoned Mausoleums in the country.

Adeyemi said he was glad that Nnamdi Azikwe’s Mausoleums was completed under the present administration of President Muhammadu Buhari, in spite of being abandoned for decades by past administrations.

“The present administration has done creditably well in giving the resting place of the first Nigerian President, Nnamdi Azikwe, a befitting site,” he said.

Adeyemi, however, decried the worrisome state of some private mausoleums due to total neglect by the government.

In his views, Olaoluwa Akinleye, the Chief Security Officer of the Obafemi Awolowo Mausoleum in Ikenne, Ogun, said the monument had been shut since the outbreak of the COVID-19 pandemic in 2020.

Akinleye said other public activities and events, which often took place in the Awolowo’s Family Compound, had also been put on hold.

“The Awolowo’s Family residence used to be a Mecca of a sort, as people from all walks of life often visit the place for different activities.

“Before now, we used to have visitors thronging the Mausoleum, including students, tourists, the political class and business people.

“But, since the outbreak of the COVID-19 pandemic, it has been closed to the public and no mater the protocol, we have not opened it to the public.

“Although, at a time, we still allowed two or three persons to peep through to see the mausoleum, they were not allowed to freely walk around the compound as they would have wanted,” he said.

Akinleye, who expressed hope that the mausoleum would soon be reopened to the public, said, “it is being properly maintained from time to time”.

According to Abubakar, the Mausoleum of the late Islamic Scholar, popularly called Sheikh Mohammed Auwal Opolorin, buried in Omupo, Ifelodun Local Government area of Kwara, are attracting many religious tourists to the town.

He said that during the Maulud Nabbiyy, tourists across the country and overseas used to visit Omupo Community.

The mausoleum, he said, is being housed within a complex, comprising of an Islamic Primary School and worship centre.

“People pay homage to the Mausoleum and engage in a two-day prayer to mark the Maulud Nabbiyy,” he said.

Abubakar added that there were other prominent Mausoleums in Ilorin that attract tourists on religious basis.

An Ilorin-based cleric, Malam Yusuf Al-Fulani, however, said that caution should be taken in visiting mausoleums.

According to Al-Fulani, Allah’s curse is upon those, especially women who light candles on the graves, taking the graves as their place of prostration or as the Mosque.

There is, however, no public mausoleums in Oyo State.

A top government official in the state Ministry of Information, Culture and Tourism, who pleaded to be anonymous, said he could not, however, rule out the existence of private mausoleums in the state.

Nevertheless, the official called for public-owned Mausoleums of well-meaning personalities, whose lifetimes had impacted positively on the society.

The official suggested that people like the immediate past Alaafin of Oyo, Oba Lamidi Adeyemi III and former Gov. Adebayo Alao-Akala should be considered for such honour.

He explained that public mausoleums, if well managed, could be additional sources of revenue generation, saying that visitors to such places would pay for their visits.

There are two private Mausoleums for two former Governors of Oyo State, one for the late Abiola Ajimobi in Ibadan and another one in Ogbomoso for the late Chief Christopher Alao-Akala.

Meanwhile, from the angle of the Christian faith, Very Rev. Oluyinka Akande of the Methodist Cathedral Agbeni, Ibadan, says “it is not a sin to build mausoleums.

Akande added that visiting their graves was to show respect and love for them.

“Visiting the mausoleum of the dead loved one is a helpful part of mourning.

“It provides a bit of comfort and consolation, especially when you are feeling lonely and empty.

“In John 20, Mary Magdalene visited the graveyard of Jesus Christ to grieve and to have deep reminiscence of Jesus’ way of life.

“Likewise, there is no where in the Bible where it was commanded, warned or taught that graves should not be visited.

“In Genesis 35:19-20, Jacob made a pillar as a mark or decoration to identify Rachael’s tomb,” the cleric said.

He, however, warned against exhibiting the character of talking or praying to the dead when visiting the graves of loved ones.

Akande said that such an act, according to Deuteronomy 18:10-11, is sinful.

“From the Old Testament, the punishment for speaking with the dead person is death by stoning, because it was indicated as a serious offence,” he said.

In his views, Pastor Francis Oghuma of the Redeemed Christian Church of God (RCCG), Jesus Place, Oluyole, Ibadan, said it had become necessary for governments, individuals or families to invest in building Mausoleums.

Oghuma said that these Mausoleums could be built in very modest ways, as the world revolves to a global village.

According to him, mausoleums can create employment opportunities, generate revenues, be a reservation area for tourism, enable historical place of value preservation for generations, among other benefits.

“Visiting the grave sites is done with respect and honour, conveying a sober and peaceful spirit. It is appropriate to bring flowers or wreaths to adorn the grave site.

“However, those who mourn must not do so as they that have no hope, for as believers in Christ, there is hope of rising again and wherein we shall meet and mourn no more.

“It is appropriate for family and friends to visit on the birthday of the deceased or on a wedding anniversary.

“Many will want to visit on religious holidays, such as Christmas and Easter, or on political holidays like Memorial Day.

“Some families pick a special day of the year to have everyone gathered together and visit several grave sites on the same day, bearing in mind that death is a reminder,” he said.

The cleric, however, called for caution on the size of the investment committed to building such sites.

“No matter the value, it remains a place of the dead,” he said.

However, Prince Tunde Odunlade, the Curator of Tunde Odunlade Arts and Culture Connexions, Ibadan, welcome building of mausoleums for historical landmark purposes and for learning about our heroes’ past.

Odunlade said that tourists, depending on their interests, would look out for anything that would satisfy their curiosity.

According to him, people go all the way to Egypt or to the Middle East to visit the tombstones of their heroes, of whom they had read about.

“The famous Nigerian top Juju Musician, Sunday Adeniyi Adegeye (Sunny Ade), fixed his 112-year-old mother’s tomb to the delight of visitors, who find it fulfilling to visit the place in his Ondo Town.

“The Queen of Sheba (Bilikisu) in Ijebu, Ogun, is a tourist destination as well.

“In a country where teaching of History in schools may have ceased, government can look at it for monumental reasons, just like some individuals who have fancied such thing can go to immortalise their people.

“But, it should be done in a way that it will be more accessible and educating, not political.

“We should give honour to whom honour is due; dead or alive, which then becomes an incentive for others to be encouraged to do the right thing while still alive.

“If people are more celebrated while alive, it’s most gracious and fulfilling.

“It is like how a former American President, Cleveland, once said, ‘Give me my rose/flower now that I can smell it,” he said.

In Ado-Ekiti, there are currently two known Mausoleums; one for the former Military Governor of the Western Region, late Col. Adekunle Fajuyi and the other of Joseph Ayo Babalola, Founder, Christ Apostolic Church (CAC) Worldwide.

While Fajuyi’s Mausoleum is erected in the heart of Ado-Ekiti and named, Adekunle Fajuyi Memorial Park, that of Babalola is located in Efon-Alaaye, Headquarters of Efon Local Government area of Ekiti.

The state government is manages the Fajuyi’s as a sort of recreation centre for tourists, thereby generating revenue from it.

On the other hand, that of Babalola, is not a revenue generating source, as it is purely a religious and pilgrimage centre, under the management of the CAC Missions.

Reports have it that sick people claim to get healed while on pilgrimage to Babalola’s Mausoleum in Efon-Alaaye.

Meanwhile, the state Commissioner for Art and Culture, Prof. Ojo Bakare, said a lot had been invested in taking tourism, arts and culture to acceptable standards.

According to him, the government is not resting on its oars, as more efforts are ongoing to achieve more.

The target, he said, was to make the state become one of the best tourism destinations in the country.