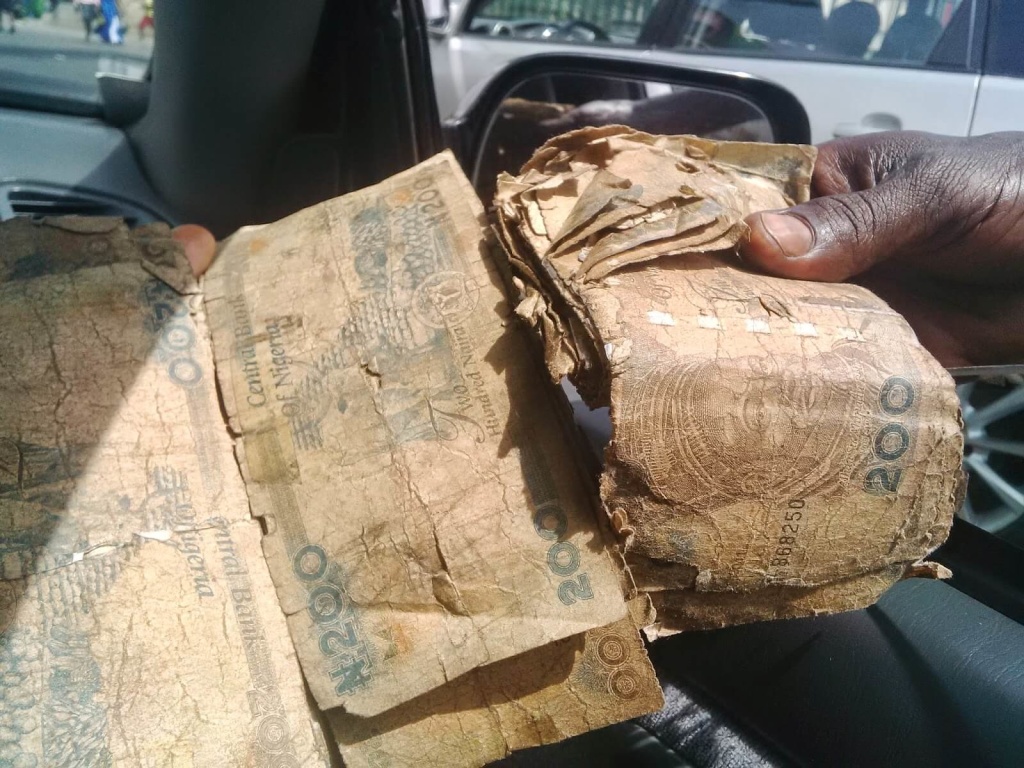 Some Nigerians have decried the widespread circulation of mutilated naira notes in the country and called on the Central Bank of Nigeria to reverse the trend and ensure better management of the nation’s currencies.
In interviews with the News Agency of Nigeria on Thursday in Lagos, they noted that several cases of misunderstandings had occurred among citizens while carrying out business transactions with the tattered and dirty notes.
They also decried the use of the polymer banknotes, which are easily defaced, and suggested a return to the paper currency for all denominations.
NAN reports that the CBN on February 28, 2007 announced the introduction of polymer versions of N5, N10, N20 and N50 notes.
However, 11 years after, many Nigerians now reject the polymer notes citing its poor quality and short life span that make it difficult to carry out transactions with them.
Tunde Okeowo, a financial expert, said the CBN should consider bringing back the coins, and that its absence had resulted in the negative impact on transactions, which had a multiplier effect on the economy.
Okeowo identified inflation as part of the negative effects of the absence of coins, especially as people were no longer bothered about collecting balance after paying for products.
He said: “On this recurring issue of scarcity of clean notes, especially N100, I advise the CBN to look into issuing some new naira notes in densely populated states like Lagos in order to make it more acceptable for use.”
He also called for continuous enlightenment to educate traders on reasons and ways of preserving the notes.
Tolu Ajibade, a civil servant, said the prevalence of dirty and mutilated naira notes was appalling, and that the N200 note was gradually becoming unfit like the N100 notes.
She said many Nigerians have resigned themselves to the reality of possessing and transacting business with dirty naira notes.
Ajibade said: “I tell you, they are appalling. As a nursing mother, I am always scared of touching those notes because it is very glaring that those naira notes, particularly the N100 are contaminated.”
She said while the CBN had been sensitising Nigerians on the handling of the naira notes, there should be effective enforcement of relevant laws to curtail mishandling of the naira.
A bus driver, who preferred anonymity, said the rejection of the defaced polymer notes and the dirty N100 notes by passengers greatly affected his business.
According to him, a day hardly passes by without verbal exchange which sometimes degenerated into fights because of dirty naira notes and faded polymer notes.
He said: “I think I prefer the paper naira notes to the polymer ones because it does not fade easily like the polymer. The only disadvantage of the paper note is that it gets torn easily.”
Besides, Dr Foluwakemi Ekiogiawe, a medical practitioner, raised concerns over the implications of regular contact with mutilated notes.
Ekiogiawe said apart from the economic implications of poor currency handling, it could lead to a myriad of adverse medical problems.
She explained that regular contact could result in the transfer of germs from one person to another, and that it could result to gastrointestinal infections, which often leads to frequent purging, vomiting, abdominal pain, fever among others.
She said: “This is seen mostly in children who put things indiscriminately into their mouths. They could serve as allergies to people with immune hypersensitivity like asthma triggering an immunologic attack.
“This happens when the individual comes in contact with the allergen in the form of or attached to the notes. These attacks could range from mild to fatal.”
NAN also reports that the CBN in February began the disbursement of smaller naira notes to traders in order to improve circulation of N5, N10, N20, and N50 in the markets.
The campaign was targeted at the informal sector, especially traders in markets with the aim of increasing the circulation of the smaller units of the naira to make doing business easier.
The bank had already taken the new measure to Kano, Kaduna and Abuja and also intended to bring it to the south.
Reacting to the development, Isaac Okorafor, Acting Director, Corporate Communications Department, CBN said the bank had so far disbursed N1.09 billion of various lower denomination banknotes in some states since it embarked on the new measure.
Okorafor said the disbursement of the funds was to over 20 different merchants, supermarkets, toll gates, eateries and other cash users.
He said efforts were being made to also penetrate the various markets in Lagos.
Okorafor said: “In this regard, we are currently engaging the market associations through their central leadership.
“Disbursement will commence in the markets the moment we conclude the logistics with the market leadership.”
He said beneficiaries of the new banknotes would include abattoirs, pharmacy, merchant’s tollgates, eateries, tollgates and car parks at the International Airport.
According to him, the lifespan of the paper banknotes is about 12 to 18 months while the polymer banknotes last for 24 to 36 months in circulation depending on handling.