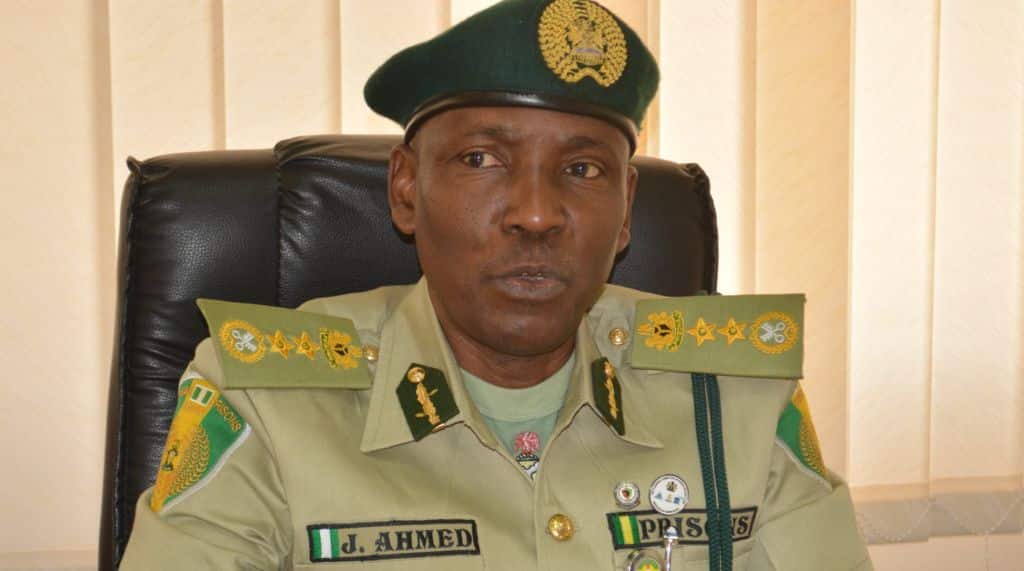 The Nigerian Prison Service has disclosed that over 68,000 inmates are accommodated in the prison facilities throughout the country as at March 2017.
The Controller General of Nigerian Prison Service, Jaafaru Ahmed, made the disclosure in an interview with the Economic Confidential.
Ahmed said the agency has reopened prison farm centres towards self-sufficiency in food production.
Speaking on the current figure of the inmates, Ahmed said: “As at March 6, 2017, total inmates population stands at 68,259.
“Out of this number, 46,351 are awaiting trial persons, and the remaining 21,903 are convicted.
“In terms of percentage, the convicted is 32 per cent, while awaiting trial persons is 68 per cent.
“Though the figures are not static as they go up and down.”
Ahmed also disclosed that the Prison Service had commenced the rehabilitation of its various farming centers with the purchase of 22 tractors that would lead the Service to specialize in food productions enough to feed the inmates and for sale to the general public.
The prison boss said: “In the 2016 budget, we purchased so many farm machineries like tractors and other kinds of implements.
“We have also dug so many boreholes, fish farming and the rest of them.
“These would be used to reposition our farm centers.
“What we intend to do when the budget for 2017 is passed is that we have picked three out of 14 farm centres.
“The idea is to make sure that we specialize in different farming processes.
“Like Kujama, we intend to set it up strictly for the production of maize.
“We want to see the production of maize all year round, not only during the raining season, but also during the dry season.
“We have budgeted some amount of money to sink boreholes for irrigation purposes to ensure the success of these programmes.
“We have picked Lampushi farm center strictly for rice production and the possibility of producing rice during both raining season and dry season.
“We have also taken Ozalla for the production of palm oil.
“These are three pilot projects we intend to do this year to see the possibility of whether the prison can actually feed itself.”
Ahmed further said the Service is looking at mechanization.
He said: “We are looking at mechanization where the crops to be produced would be in large quantity both for self and sale outside.
“The process would reduce the manual labour and subsequently enhance production.
“The development will no doubt bring on board storage facilities when fully integrated so that all the areas will have comparative advantage.”
Speaking on the synergy existing among the three arms of the criminal justice system, Ahmed said the Prison is the last bus stop and only a custodian of all the parties, namely the judiciary cum the prosecution authority, which is the Ministry of Justice, the police and the prisons.
Ahmed noted that so long as anybody knocks on the door with valid warrant and appropriate papers, “we have no option but to receive such persons”.
He canvassed for a genuine collaboration among the three arms of the criminal justice system to enhance synergy so that the case of anybody brought to prison as awaiting trial will be determined as quickly as possible, stressing that other arms have to do their part so that there would be quick dispensation of justice.