Nigerian becomes first black woman to be elected into ICW Board 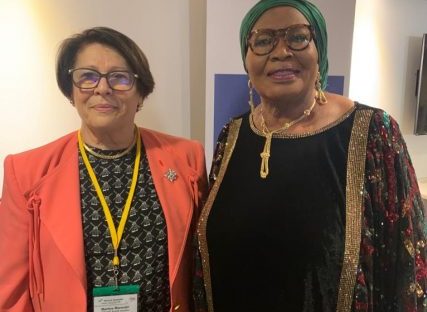 The International Council of Women has elected Dr. Gloria Laraba Shoda, into its board.

With the election, the highly rated Nigerian becomes the first black African to be so elected into the ICW Board.

The election took place on May 17, 2022 at the Mecure Point Hotel, Avignon Centre, France during the Annual General Meeting of the ICW.

In that capacity, Dr. Shoda will be in charge of African Women Councils affiliated to the ICW.

Before her appointment, Shoda was the immediate past President of the National Council for Women Societies in Nigeria, having served between 2016 and March 2022.

Born in Kawo, Kaduna State, she attended St. Peter’s Demonstration School and St. Faith’s College, both in Kawo, for her primary and secondary education respectively.

She enrolled for her Bachelor of Education Degree at the University of Benin in 1989 and graduated with Second Class Upper.

Dr. Shoda later proceeded to the University of Ibadan, where she obtained a Master’s degree in Education (PhD Grade) in Community Development in 2005.

She attended the senior executive course 36 at the prestigious National Institute of Policy and Strategic Studies, Kuru, near Jos, Plateau State in 2014 and bagged the title of Member of the National Institute.

She also did a Doctorate degree programme in Peace and Conflict Management at the Theological Seminary College, Ibadan, Oyo State between 2012 and 2014.

Dr. Shoda is the first female chairman of the governing council of the Moshood Abiola Polytechnic, Abeokota, Ogun State.

A businesswoman of no mean repute, her business interests cut across the globe.

When the ICW created the African Regional Council of Women in 2018 in Jakarta, Indonesia, Shoda was selected to administer the new body alongside others from South Africa and Morocco.

The headquarters of the ARCW is in Abuja, Nigeria, with Shoda as the maiden president.

The ARCW seeks to, among others, improve the welfare, progress and standard of living of women, girls and the vulnerable as well as increase women’s participation in political life in Africa through access to decision making.