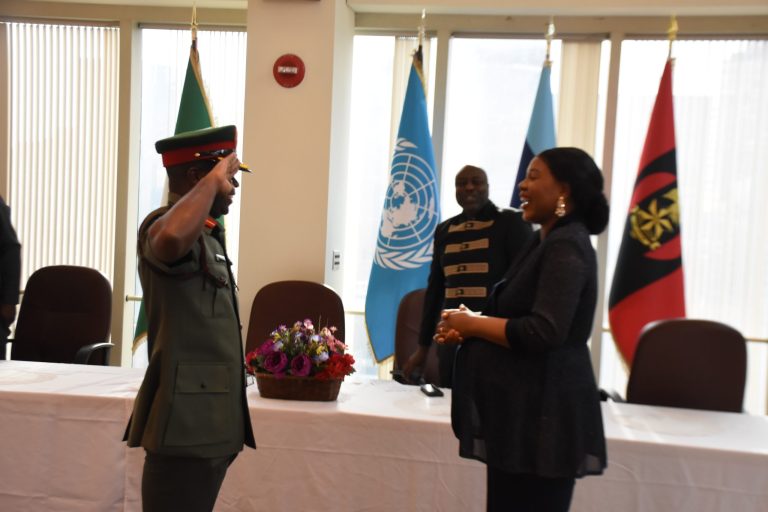 The Deputy Permanent Representative of Nigeria to the United Nations, Ambassador George Edokpa, in New York decorated a newly-promoted officer of the Nigerian Army, Cyril Iruegbukpe, from the rank of Lieutenant Colonel to Colonel.

Edokpa was assisted by the Colonel’s wife, Weleayam Iruegbukpe, to decorate the officer at Nigeria House on Tuesday.

Iruegbukpe is among 39 officers that have been promoted to the rank of Colonel out of 65 Nigerian Army officers that passed out from the Nigerian Defence Academy in 2004.

He is currently a Staff Officer Grade 1 Operations at the Defence Section, Permanent Mission of Nigeria to the United Nations in New York.

Edokpa congratulated Iruegbukpe and lauded his commitment to duty, citing his hard work at last UN General Assembly in September.

“We thank God for all your achievements in life and wish you greater height in life,” he said.

Similarly, Benjamin Olafaju, the Head of Chancery of the Nigeria Permanent Mission to the UN, described Iruegbukpe as a wonderful officer to work with and also recalled how he worked hard during the last UNGA.

Olafaju said: “I want you to know that promotion comes with higher responsibilities and with God on your side and support of your family, sky is your limit.”

In his remarks, ACP Baba Kalli, Police Adviser, Defence Section at the Permanent Mission, congratulated the officer on behalf of the IG of Police, Usman Baba.

Kalli urged the officer to brace up for more work, noting that his promotion was a call to higher responsibilities.

Similarly, Bolade Sobola, President of the United Nations Staff Recreation Council Nigeria Association, congratulated the officer on behalf of the association, urging him to double his efforts as new rank comes with higher responsibilities.

Responding, Iruegbukpe thanked the Almighty God for the gift of life to witness this day, noting that it is indeed a long journey to attain this enviable rank of Colonel as it started in 1999.

The officer thanked his superiors and those that have assisted him to attain the feat and he reaffirmed his commitment to duty and diligent service.

He said: “Let me reassure the appropriate superior authorities that have granted me this elevation, that I will remain committed to the ideals of the Nigerian Army and remain loyal to the Federal Republic of Nigeria.

“I also acknowledge the words of advice from my superiors and colleagues, and I promise you all that I will not let you down.”

In addition, he thanked his wife for her steadfastness and “belief in me, for keeping the home front steady and for her prayers”.

The News Agency of Nigeria is reporting that the Mission also used the occasion to send off its local staff, Timothy Sandram, Head of Transport Section-Defence Section, who had worked with the section since 2018.