Nigeria lost N2.2t to oil theft in one year under Jonathan – Aregbesola 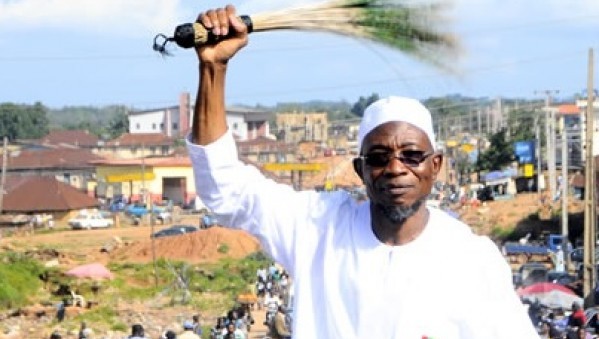 The Governor of Osun State, Ogbeni Rauf Aregbesola, on Friday said the Nigeria has lost N2.2 trillion ($14.6 billion) to oil theft within a year under the President Goodluck Jonathan-led Peoples Democratic Party.
In a release by the Director of Bureau of Communication and Strategy in the Office of the Governor, Semiu Okanlawon, Aregbesola was quoted as speaking in Akure, Ondo State after the Walk for Change programme that saw a huge population of residents of the state joining the All Progressives Congress vice presidential candidate, Prof. Yemi Osinbajo, to sensitise the people on the need for change of government in Nigeria.
Walk for Change in Nigeria is a civil society organisation, which is interested in sensitising Nigerians for the necessary change in the country.
The governor revealed that Nigeria loses 400,000 barrels of crude oil to oil theft everyday according to Federal Government statistics.
According to him, 400,000 barrels at the conservative figure of $100 a barrel translates to $40 million loss to the country on daily basis.
Aregbesola lamented that what the country lost to oil theft in a year is more than the total amount of what all 36 states gets as allocation in four years.
Aregbesola said: “If 400,000 barrel of oil is stolen everyday and the President can say so, it is disheartening.
“From July 2013 to July 2014, if we calculate what the nation is losing by $100, Nigeria loses $40 million daily to oil theft.
“What we lost in just one year to oil theft in a year is more than the total amount of what all the 36 states of the federation get as allocation in four years.
“This is not a way to develop a country.
“Nigeria is being bled to death by some unscrupulous individuals.
“We shall not remove them through the barrel of gun or by violence.
“We are going to chase them away with our votes.
“If this amount is spent on education alone, we will have the best of education.
“If spent on roads, we will have the best of road network system.
“Today, we are neck deep in poverty, underdevelopment and socio-political and economic stagnation.
“No power can surpass or suppress the will of the people whenever they resolve to change what they do not like.”
Aregbesola added that the February general election is for the people to vote for development and growth and a signal to an end to poverty and misery.
He urged the people to quickly go and collect their permanent voter cards so as to be able to vote for change.
Osinbajo, the vice-presidential candidate to General Muhammadu Buhari, on the platform of the All Progressives Congress, stated that APC, when voted into power come February 14, will be the first government in Africa to institute a social security welfare for its citizens.‎
He added that the APC government when sworn-in on May 29 will change the country from its poverty status to that in which citizens will have abundance and once more be proud of the nation.
Osinbajo added that the coming of the APC will usher in a government of the masses, which will focus on youth employment and infrastructural development in all ramifications.
He said: “Our government, which will also be your government, on assumption of office will employ 20,000 youths in every state of the country and agriculture will be given a major priority.
“Every pupil of primary schools in Nigeria will be fed free every school days in every state.
“It will also be a government where health care and other sectors will be adequately catered for by government.”