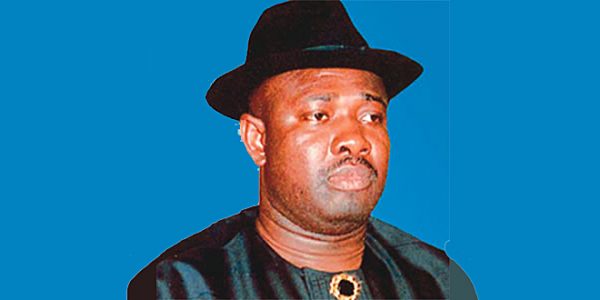 The Federal Government on Sunday said it was losing 9 billion dollars (N3.2 trillion) annually due to poor investment in agriculture before the present administration came to power.
The Minister of state for Agriculture, Senator Heineken Lokpobiri, disclosed this at Afe Babalola University, Ado Ekiti, at a reception and lunch in his honour by founder of the university, Chief Afe Babalola (SAN).
Lokpobiri said: “Before President Buhari came, Nigeria was losing $9 billion revenue earnings annually in agriculture sector.”
The minister said Nigeria was also losing over 240 metric tonnes of fish production in the world market that could have increased foreign earnings and boosted the economy before the advent of President Muhammadu Buhari’s led administration.
He said: “In Nigeria, we are not producing enough fish to feed our population, that is why we are relying heavily on importation.
“The deficit between demand and supply was 2.5 million metric tonnes annually; this is about 320 containers.
“You can imagine the quantum of revenue we lost to low production in this sector alone.
“Knowing that our products were being taken to other West African nations to be processed and rebranded, we introduced certification policy for all our products in order to have right and proper certificates for our products and in order not to affect the Gross Domestic Products negatively.
“When I visited Belgium, the Minister of Agriculture there told me the country’s annual revenue earning in agriculture sector was 35 billion Euros. This is a country with less than five million population.
“He further told me that the difference between agriculture in Africa and the West is Technology and innovation.
“That was why the Federal Government in partnership with the world bank, earmarked 250 million dollars to train young graduates in agribusiness.
“Our universities must pay attention to technology and innovation.
“They must emulate what ABUAD is doing in agriculture sector, because I wonder what would happen to us in future if we cannot feed just 180 million population.
“We are proud to say that ABUAD has become the pride of the nation. It is setting the standard for food security in Nigeria.
“All these accounted for why President Muhammadu Buhari said we must produce what we eat.
“He reduced taxes in agriculture to attract investors to Nigeria. We are also taking pragmatic steps to increase productivity in the sector.”
Lokpobiri said that due to government’s laxity in the past, many of the country’s agricultural products were being exported to other West African nations and branded in the names of those countries after processing, making Nigeria to lose huge revenue earnings.
The minister said a lot had been done by the present administration to rebrand agriculture.
He urged Nigerian universities to emulate ABUAD’s landmark exploits in farming, describing the university as setting a pace for the country to actualise food security status.
Lokpobiri expressed fear that the country might witness serious famine in future with the projection that its population might hit 250 million by 2030.
He warned that it was high time other levels of governments started planning to checkmate such occurrence.
The minister promised that the Federal Government would partner ABUAD in the area of agriculture and training of young graduates to boost food production.
He said the 400-bed Afe Babalola University Teaching Hospital had launched the country on the world’s map of medical tourism, describing it as a wasteful effort for Nigerians to be seeking medical treatment abroad with the facilities in the hospital.
On the ABUAD teaching hospital, Lokpobiri said: “The era when people are seeking medical tourism in Dubai, India and USA is gone.
“Why must you struggle to get visas again when you have Afe Babalola University Teaching Hospital. The personnel and facilities there are second to none.”
Babalola, who is currently rated as the biggest farmer in Ekiti and the highest tax paying individual in the state, said he organized the event in appreciation of his contributions to the growth and development of agriculture in the country.