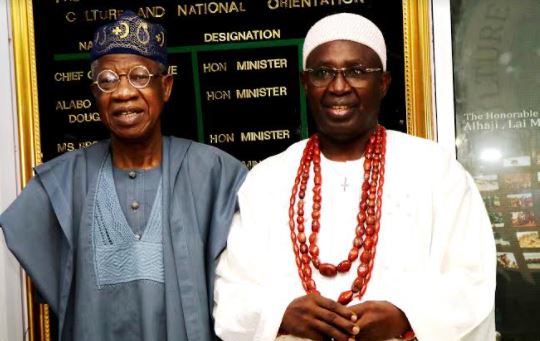 The Minister of Information and Culture, Alhaji Lai Mohammed, has assured Nigerians that in spite of the current security challenges, the country is in safe hands.

The Minister, who gave the assurance while receiving the Oluyin of Iyin-Ekiti, Oba Adeola Adeniyi Ajakaiye, on a courtesy visit to his office in Abuja on Thursday, urged Nigerians not to succumb to the apocalyptic or doomsday predictions about the country because such predictions won’t come to pass.

Alhaji Mohammed stressed the critical role of traditional rulers in the maintenance of peace and security, saying they cannot and must not be ignored, as the nation seeks to restore peace and security across the country.

He appealed to Oba Ajakaiye to work with his fellow traditional rulers, as well as the Government of Ekiti State, to ensure peace and security in the state.

Responding to a request by the traditional ruler to help put the tourist sites in the town on the national and global map, the Minister pledged his readiness to leverage the media and technology to showcase and popularize the historic ‘Esa Cave’ as well as the ‘Okuta Abanijorin’ (the rock that accompanies you on your trip), both foremost tourism sites in Iyin-Ekiti, in the Irepodun/Ifelodun local government area of Ekiti State.

”Putting the tourist sites on the national and global map will attract tourists, which will in turn boost the economy of not just Iyin town but indeed the entire Ekiti State,” he said.

Alhaji Mohammed therefore directed the Directors-General of the National Commission for Museums and Monuments (NCMM), Nigerian Tourism Development Corporation (NTDC) and the National Institute for Hospitality and Tourism (NIHOTOUR) to undertake a working visit to the two tourist sites and report back to him.

In his remarks, Oba Adeola Adeniyi Ajakaiye said Iyin-Ekiti is blessed with numerous tourist attractions that have the potential to bring the community to national and global limelight and create jobs for its youths.

He stressed the need for the federal government to leverage on the tourism industry in its drive to diversify the economy away from oil.

Oba Ajakaiye used the occasion of his visit to invite the Minister to his forthcoming coronation as well as to visit the tourist sites at Iyin-Ekiti – the two requests that were granted by the Minister.