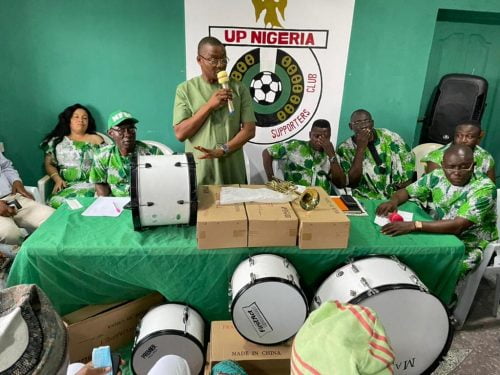 The Nigeria Football Supporters Club has inaugurated musical equipment to enable it adequately support the country’s national teams at international and local competitions.

According to the News Agency of Nigeria, the instruments inaugurated on Thursday at the club’s monthly Star Night and Investiture of new members included 10 drums and sticks and six trumpets donated by one of its members based in Russia.

Inaugurating the instruments, the club’s National Chairman, Rev. Samuel Ikpea, noted that the equipment would help the team cheer the country’s teams at both continental and global competitions.

Ikpea said the drums and sticks the National Band had were old as the last set was bought seven years ago.

He listed some of the forthcoming competitions to include the Africa Cup of Nations, which begins in January 2022 in Cameroon, and the 2022 World Cup in Qatar.

He recalled that he spoke with one of the members in Russia without disclosing his name about the dearth of musical equipment in the organisation.

Ikpea said: “I discussed with one of our members in Russia on Monday, April 12, and complained about the need for trumpets in the club as a matter of urgency, and he promised that he was going to respond.

“Surprisingly, I got a call from a delivery man on April 14, who said he had a package for the club; and when I got there, behold, it was six brand new trumpets from him.

“Another member has promised to donate four more drums soon to complement the ones the current executive just bought.”

Ikpea appealed to the instrumentalists to make good use of the equipment to lift the spirit of the national team players even when the odds are against them in a match to eventually win.

He also appealed to corporate organisations and philanthropists to assist the club in its chosen call of cheering the national teams and promoting football, especially now that normal competitions are gradually returning.

An old member of the club, Alhaji Mabadeje Rasak, commended Ikpea’s leadership for moving the club forward and promised to continue to support the executive committee at all times.

James said: “I want to applaud the leadership of Ikpea and the present executive.

“It has brought innovations to the club.

“He (Ikpea) has galvanised the membership to work towards one goal of supporting the Super Eagles and promoting football in general.

“My team, the instrumentalists, will remain grateful to the incumbent leadership of the NFSC and pray that God will continue to direct the national chairman for the good of our club.”

The band tested the instruments to the delight of the members who took to dancing and singing, replicating their skillful displays at match venues.